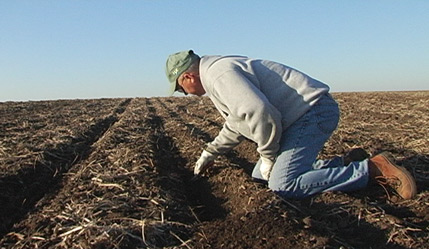 With rustling corn tassels, warbling bird songs, skies rippled with pinks and iridescent blues, and sometimes just the calm silence of a meandering light breeze, John Helde has interspersed this look at the family farm life with tender respect.

Set to the folksy fiddle and guitar of Truckstop Souvenir, Helde’s doc makes a social statement about the values of simplicity, honest labor, integrity and a family working together.

As a matter of fact, there seems to be a love affair here between the filmmaker and his subject. Each scene, whether of people chatting at a small kitchen table or a combine gliding gently out in the golden field, reflects something wholesome and honest.

“Field Work” follows the daily life and challenges of the Swanson family in Boone County, Iowa. They rent about 500 acres and plant half in corn and half in soybeans. Charlie Swanson, the father, says, “I do not choose to farm more ground than what we can farm.”

Interviews of old-timers and comments by the Swansons tell us how farming has changed in the last 100 years. Farmers used to be self-sufficient, rotating several crops and keeping livestock. Now there is significantly less diversity and old cooking chores, like canning meat, are lost arts. Times have changed irreversibly.

While all of these small farmers are keenly interested in a profit, they also want to stay small enough to do what they love well. Jeremy, the oldest Swanson son, says he has “no desire to farm 10,000 acres.” He just wants to farm as “a good steward of the land.” However, thinking of retirement he adds pragmatically, “I would like to own enough acres so that we could cash them out for our kids or whomever. It’s our 401 K.”

Helde’s film covers the basic challenges to small farming. Why is it so risky? Why do so many families urge their children off the farm? What are the greatest hazards? What keeps more farmers from going organic? Why do the Swansons only rent? And why on earth do the Swansons want their children to join them in expanding a risky venture?

With a smile, Jeremy explains his obsession with farming. “The pull to farming is making a profit at something that can be hard to be profitable at . Like being good at playing poker. I’m gonna try to do something a lot of people can do and be good at it.” And yes, he’s also charmed with the land, the harvest and working with his family.

Helde has expressed the hope “that farmers will identify with the struggles and questions played out in the film.” He also hopes that through this documentary urban-dwellers “may better understand the challenges, motivations and dilemmas of those who practice this age‐old occupation in the twenty‐first century.”

The best parts of this film, set to the delightful guitar/fiddling of Lauryn Shapter and Dennis James, is Helde’s homage to farm life – warm golden lights, little red tomatoes plopping into a bucket, still vistas across a bountiful land and Judy Swanson rocking in a chair while snapping peas or beans.