“It is during our darkest moments that we must focus to see the light,” noted Aristotle Onassis, Greek shipping magnate, Jackie Kennedy’s second husband and father who lost his son. These words are also scripted, decorated and pinned on the wall by a student at Archway Academy, a recovery high school in Houston. 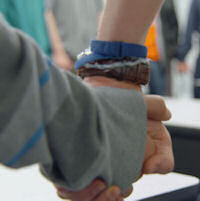 When you hear a story about an addict, you are hearing a story about pain and tragedy. By the time Sasha McClean was seven, a lot had happened in her family that affected her mental health. She had panic attacks, but drinking settled her. She has a framed picture in her office of the last night she went drinking to remind herself that “on the outside I looked okay, but in the inside there was a big shitstorm.”

Now, McClean is the executive director of Archway, a residential high school for students in recovery from addiction. Established in 2003, Archway is located inside Palmer Memorial Episcopal Church.

Greg D. Williams and Jeff Reilly, the filmmakers who brought us “The Anonymous People,” have produced this follow-up film to address the desperate needs of the American teenage population. Acknowledging that by 2014 overdoses became the leading cause of accidental death for those aged 15 to 34, worried that 1.3 million adolescents have a substance use disorder and alarmed that after treatment a high percentage of teens go back to using, Williams and Reilly document a program that has been proven to work.

After being in treatment for substance abuse students typically return to high school and the same environment and group of friends that spawned their addiction in the first place. A young gal interviewed explained that everyone at school she knew could easily obtain whatever drug was wanted.

However, at residential recovery schools like Archway there is a structured program, weekend field trips and academic instruction focused on the health of the mind, body and soul. The students are in a controlled environment with random urine tests, counseling and group sessions where they learn to love each other and themselves.

Upon publishing the review for “The Anonymous People,” I joined the AA Facebook forum and asked participants what they thought of the idea of giving up anonymity. Not one person had a positive thing to say. They saw anonymity, particularly in the beginning, as a necessary step in their own personal recovery. However, the recovery high school idea got a Like – and no negative responses.

The mind of the adolescent is still maturing and in adolescence involves a fervent desire for community and acceptance. Using this phenomenon, Archway uses its students to help each other. Anonymity is sacrificed for courage and support.

Odysseus, an earlier seafaring compatriot of Onassis, saw his ship’s crew affected by drugs. Many had lost all sense of their goals. He knew the antidote. Get them out of the environment as sternly and as quickly as possible. Tying the resisting to their oarlocks, the mariner of old forced his crew to row as fast as possible to leave the land of the Lotus Eaters, never to return.

When you are an adult with financial obligations, you can’t always change your workplace or career situation. You can’t always leave your immediate surroundings. However, when you are younger, when your fragile brain is still developing, a recovery high school might be the vehicle that saves a life.

As part of a two-night presentation on addiction and the community, the Northwest Film Center is presenting “Generation Found” on Nov. 21 with the Mental Health Association of Portland, the Alano Club and 4th Dimension Recovery Center. A panel discussion will follow the screening.