“If you are trying to rescue people from hell you have to kinda go to hell to do it,” Jonathan Rapping, Georgia law professor, patiently explains to Brandy, a warrior in America’s shaky battle in the criminal justice system. She’s been a public defender for three years and has a caseload of 150 clients at a time. She’s paid a low salary which makes it difficult for her to pay her college loans as well as her bills.

Before I advise you to see this movie, there are some things you’ve got to know. First, it’s only since 1963 that those arrested who could not afford a lawyer must be provided a public defender. Second, if you plead guilty, even if you are innocent, there is a higher probability that you will get a lesser sentence than if you didn’t. Third, 1 percent of Americans are incarcerated.

Dawn Porter, the filmmaker of this doc, is a lawyer who once worked for a prestigious firm in Washington DC and then for a TV station in New York City. Now she finds important issues and packs them into documentaries. This doc is about the problems involved in providing the indigent a fair trial.

Porter uses two young public defenders to reveal the secret hell in our criminal justice system. They work frantically, knowing the stakes are high for their clients. If they don’t make sure the defendant gets justice, someone’s going to be taken out of society and put in a hell hole greater than they can handle.

The first problem is that once arrested, most people get to post bail so they can still function until their trial date. They can keep working, keep parenting and keep up on their obligations. However the indigent don’t have this ability, so they have to wait four to six months in jail until they go to court. While in jail their finances deplete. Then they lose their homes, their jobs and sometimes their cars. That seems to go against the Bill of Rights for a speedy trial.

The next problem is that children who are arrested are kept for years in a Juvenile Detention Center. When they turn 21, they can be charged as an adult.

The third problem is that the lawyers assigned to indigents have so many clients on their caseload, usually around 150 at any given time, that a thorough, professional defense expectation is nearly impossible.

Enter Brandy and Travis, the two public defenders followed by the filmmaker. They live their jobs. They have no families – where is the time to develop a relationship? Travis lives in a mess close by his office. They both work night and day.

Travis is like many of the accused that he defends. Abandoned by his mother at 12 years, he has never known his father. However, at a pivotal moment when he is defending someone with a similar history, he as the opportunity to meet his father for the first time.
We get to know two of Brandy and Travis’s cases pretty well. Porter is allowed to film in courtrooms and interview the families involved. The stories unfold and we are educated about the system. The film is a must-see.

If ever there was a cause to support, it is Rapping’s Southern Public Defender Training Center, now known as Gideon’s Promise. This is the organization that supports Travis and Brandy. In a moving moment at a GP event, John Lewis, Congressman and Civil Rights leader, simply states, “Our lives are not alone. They belong to those who need us desperately.” 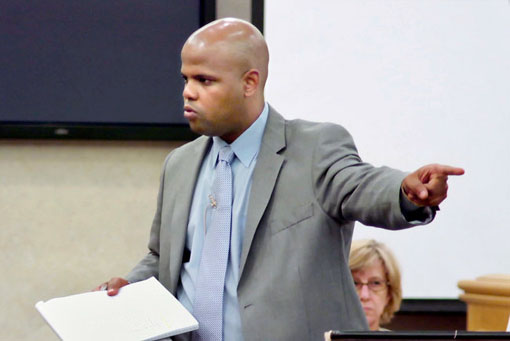