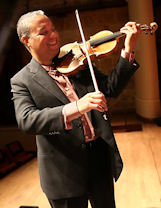 Tender playing and soul-inspired composing spear the center of your soul. Music this joyful and knowing is rare. Perhaps the product of extraordinary choices or maybe just DNA, this story of Ilmar and Aldo Gavilán is a tour de force

The title music played at the end of the film expresses the entire documentary in one gentle, wistful musical score. One Cuban brother sends his piano version of his composition and asks his Cuban-American brother to write the complimentary violin part. The result is a musical duet evoking family, beauty, loss, and longing.

Two musical proteges, two brothers, make two different decisions. One chooses musical opportunities and the other chooses love. One stays in the US and the other returns to Cuba. Even though both are esteemed artists in separate countries, it is when they work together as composers and in duet that the universe opens and their souls are liberated.

“Los Hermanos/The Brothers” is the story – exceptionally well-told by the filmmaker team of Ken Schneider and Marcia Jarmel – of brothers separated by the US policy towards Cuba. At 14, the Cuban Minister of Culture facilitates Ilmar Gavilán’s move to Russia to begin the mastery of the violin. He must go with his mother who must leave her family.

Ilmar ends up successful, eventually founding the New York-based Harlem Quartet, known for its “mission is to advance diversity in classical music, engaging young and new audiences through the discovery and presentation of varied repertoire that includes works by composers of color” (http://harlemquartet.com/the-harlem-quartet/).

The other son, Aldo Gavilán, left behind at age 8, was already a composing piano protege. Though he also ended up studying abroad much later, because of love he made the decision to return to Cuba and marry Daiana García, a noted Cuban conductor. Though he has no access to a tuned grand piano suitable for recording, he makes due, going beyond pure classical with an electric piano in a Cuban band.

Schneider and Jamal document the correspondence between the brothers. Aldo communicates by sending recordings of his compositions, using Ilmar as his critical audience. Their goal is to play them together in a tour.

Set against a backdrop of fickle American policies, whether the reunion happens or not parallels the situation of separated Cubans who must make similar gut-wrenching choices between opportunity and family. For these brothers, it is that they are transcendently better musicians together than apart, just like most family members do better when united.