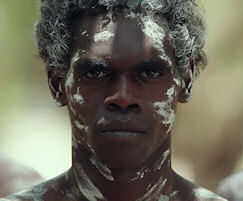 The title brings two scenarios to mind. One is the concept of arguing for a better, higher purpose. The other is to take high ground for a military advantage. It is a nicely chosen title as this powerfully shot movie argues for both sides of the apologetic high ground while exhibiting graphic and unrestrained warlord style murder.

On one side the colonial military, WWI veterans, claim to be enforcing and protecting the only law in the land. That is English law, of course. The indigenous people defend their right to hunt, roam and survive as they have for millennia. The end of the movie is more or less a stand off with the audience left to decide who won.

Set in Northern Australia in 1919, “High Ground” starts off with a grizzly and graphic massacre, setting the stage for a revenge thriller that never happens. Rather, as in Carol King’s song, “It was a very good year for the undertaker…” as people on both side die like flies. They die in decidedly unheroic circumstances, groveling in the dirt as in Kurosawa’s “Rashomon” and shot point blank by terrified assassins. There is no honor in these deaths of war. The gunshots scare giant flocks of birds and then are replaced by deadly quiet. The birds fly free and strong, a far cry from struggling mankind weakened and left less likely to survive.

WWI veteran-cum-policeman Travis (Simon Baker) is slowly failing to command a rag-tag militia of law enforcement officers as they finally break their leash and kill without command or control. Burdened by horrific memories of the war he returns to his sister Claire (Caren Pistorius) who is running a mission in the wilderness with her sniveling missionary partner. Travis brings her the Aboriginal child Gutjuk (Guruwuk Mununggurr) the only survivor of his latest police debacle.

Twelve years later, Gutjuk is used to help trap his renegade uncle Baywara (Sean Mununggurr), the last leader of the Aboriginal people still at large. This will not end well.

The magnificent Outback is filmed as a character, its vastness amplified by aerial shots of flocks of wild birds and countless thousands of acres of lush beauty. As deadly as it is beautiful the land is a fetid petri dish of disabling heat and humidity and home to the deadliest poisonous creatures on earth. Travis’ point of view is periodically shot through his rifle’s telescopic sight, revealing the mechanistic, tone-deaf and environmentally blind colonial POV. Gutjuk later grabs the rifle, briefly, before he throws it into the dirt and abandons it as the useless tool it is.

The indigenous band loosely led by Baywara has another spiritual leader in the female Gulwirri (Esmerelda Marimowa), whose performance steals the show. Injecting an iron-fisted feminist message into the environmental and anti-colonial themes, her handling of a war club shows she has every right accorded to her society’s men. The strong willed but hamstrung missionary counterpart Claire does not come close.

A fantastic second narrative feature by director Stephen Johnson (screenplay by Chris Anastassiades) with spectacular cinematography by Andrew Commis (AACTA nominated for his work on “Baby Teeth”). What could have been a mediocre revenge thriller is elevated to much higher ground by a sensitive and skilled cast and crew. 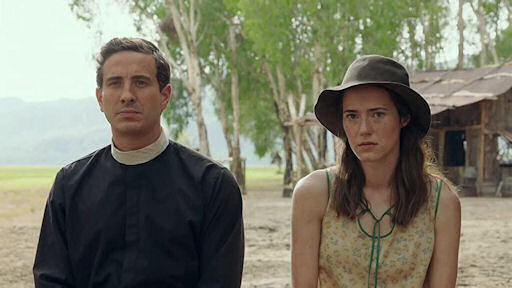