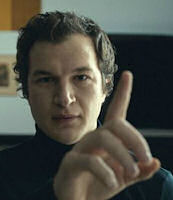 Headlining BAM’s fourth edition of Kino Polska: New Polish Cinema, Malgorzata Szumowska’s movie is a playful and atmospheric essay on human kindness and environmental frailty. Co-directed and written with Michal Englert, the Venice Film Festival hit succeeds without having much of a plot at all. Rather we see one person taking it one step at a time. Meeting a succession of people and showing them that happiness is not something to be worked for as much as it is a letting go of non-happiness.

Itinerant masseuse Zenia (Alec Utgoff, “Stranger Things”) comes from his birthplace Chernobyl bearing nothing but his foldable massage table, slung over his shoulder like Jesus carrying his cross (he also bears a string of “radioactive” jokes). As he passes through the barrier into the wealthy enclave of his clients the gatekeeper asks, “Isn’t that table heavy?” We all know the answer to that one. Perhaps it is, but not as heavy as the hearts of the needy he is about to visit.

His massages end in a sort of hypnosis that transports the recipient into a verdant forest of lush green ever changing shades and shadows. This is a far cry from the pure white neighborhood of beautiful architecturally perfect mansions that is his treatment territory. His clients are a cross section of humanity and a cross section of human foibles. Lust, greed, alcohol abuse and war are represented, a systematic humanized breaking of the ten commandments.

There are three meta-characters in the film, adults, children and animals. The children know the truth, we assume having not yet been corrupted and burdened by materialism. Animals, likewise, live for today, eschew materialism and appreciate the world for what it is. The on-going joke of the runaway dogs follows through the movie as the plot thickens. First they are being led on walks by the adults, then they are leading the adults.

Describing Christmas to a child who is beginning to see the filmmaker’s dim view of adulthood, Zenia says Santa comes when it snows. When the child utters the titular “Ain’t never gonna snow again” the chase is on.

The movie ends with a choral performance by the children at their school, followed by a magic show that has come to include Zenia as a replacement for the recently deceased magician. In a remarkably powerful last act the fourth wall between the audience and the magic is broken, as if to suddenly include the audience in the performance, the film and the magic. They are not simply watching the earth, the animals, the children and the snow, they are vitally affecting all of those. It is only through the act of caring and understanding that it will, indeed, snow again.

Poland’s submission for 2021 Oscars Best International Feature Film, there are few movies this year that take advantage of the medium as well as this one. Lynchian lights flash, dogs run amuck in empty swimming pools and a beautifully executed classical soundtrack set it off. A few special effects are used when required and they are used to maximum advantage on a minimal budget.