Review: Lots of Kids, a Monkey and a Castle 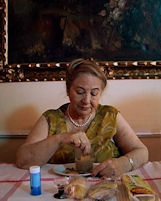 This bizarre feature memoir was filmed by Spanish actor/director Gustavo Salmeron, at the pit of his family’s demise. While his mother, Julita, had gotten her three wishes – lots of kids, a monkey and a beautiful castle – they lose it all in the Spanish economic collapse.

In the chaos, Julita looks for her grandmother’s vertebrae. Yes. Her grandparents were killed during the days of Franco and their bodies were left to decompose by a river. She had put all that was left – two vertebrae, a tooth and a finger – in a tin box that used to house diarrhea pills.

It’s with movies like this that I ask myself, why did Bill Foster, the manager of the Portland International Film Festival, include this in his lineup this year? Foster is known for his interesting, thought-provoking choices.

“Lots of Kids, a Monkey and a Castle” can be seen Feb. 18 and 25 at the 41st annual Portland International Film Festival in Portland, Oregon.