I love this film. Couched in poetic scenery through the seasons, this love story/documentary reveals a 76-year partnership that teaches and inspires. 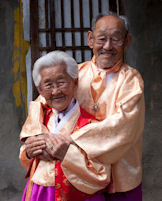 The couple lives on a traditional South Korean outpost across from an embankment to a bubbling stream. They have two dogs and they have each other. After raking leaves the husband, Jo Byeongman, laughs and picks up a surprise armful and throws them at his wife. She returns the favor and they laugh as they decimate their entire morning’s work.

In winter, the wife, Kang Gyeyeol, offers her husband a handful of the first snow, promising him that eating it will improve his hearing and vision. He takes some and immediately tells her that now he can hear all the sounds from the nearby mountains. They laugh and start a snowball fight.

In the spring they pick yellow flowers and decorate each other saying, “You look so lovely.”

Dressed each day in beautiful matching Korean clothes, sleeping on a hardwood floor holding hands, and using an outhouse while the husband sings, the two live the simple traditional life they are used to.

She worries about her dear husband’s health and the possibility that he will die first. She pours water over him as he sits in a big bowl for washing and she gently dresses him as he coughs from a terminal condition.

Their purpose in life is to support each other. He still piles wood on his back and she still collects greens from the river to prepare healthy meals. They throw water at each other in the river, sing and dance. But the wife confesses, “Nothing makes me happier than to see him enjoy his food.”

Filmed during 15 months by director Mo-young Jin, each scene is an inspiration and education on the manifestation of a successful marriage. Audiences have fallen in love with this couple making this documentary South Korea’s most successful independent film of all time.