Review: Neither Heaven Nor Earth 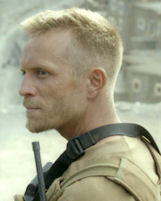 First-time feature director Clément Cogitore cuts one loose with “Neither Heaven Nor Earth,” and atmospheric allegory about the war in Afghanistan. Written in collaboration with Thomas Bidegain, one feels this movie as much as seeing and watching it.

The date is 2014 and the time is fast approaching for the withdrawal of French troops from the Wakhan Valley on the border of Pakistan. Cinematographer Sylvain Verdet gives us a land more desolate than can be imagined. There is no grass, nothing but rocks and never ending hills. The Taliban blend into the moonscape like the rocks themselves, but there is something worse going on. Men on both sides are disappearing without a trace. The only explanation is the unthinkable. The valley is Allah’s land and any person who sleeps there will be taken.

Starring Jérémie Renier as French Army Captain Antarès Bonassieu, the movie treads lightly as first. Starting as a typical documentary style war narrative, Cogitore ups the tension as the impossible starts to become real. The scree and bone-dry soil click and clack as the men trudge up and down the hills. Every hill looks the same. Nothing changes. As western logic fails to explain the situation, or justify the soldiers’ mission, their dream of returning home begins to fade, a mirage in a desert of despair.

With glimpses of “Apocalypse Now,” the story becomes a speeded up version of the war itself. Starting off as a tight knit, well planned operation, things turn up that are anything but planned. As hard as the soldiers try to reason with the villagers, the locals have no control over the situation. Convinced the enemy has somehow stolen their men without a sight, sound, clue or gun shot, the French soldiers find themselves trading territory to the Taliban for the chance to scour the enemy sector.

At the same time, the Taliban scour the French sector. There is no explanation except that offered by the shepherd boy, and that explanation represents the worst defeat if all. There will be no winners in this battle, only the realization that being there was the biggest mistake imaginable. There are forces at play that are indescribable by either side’s soldiers. The fight is taking place on a lopsided chess board that topples both forces over at will.

The Captain cannot sleep, even when he takes sleeping pills to offer himself as bait to the irrational legend. There is no relief from the tedium. Not even, it seems, the relief of death. The only relief is a nameless, honorless disappearance. A desertion of one’s duty in the face of impossible odds. There are no bodies to bury, only nightmares day and night.

A prize-winner at the 2015 Cannes Critics’ Week (then titled “The Wakhan Front”), the movie received its US premiere at NYC’s New Directors/New Films. This is a genuine and sincere war movie. 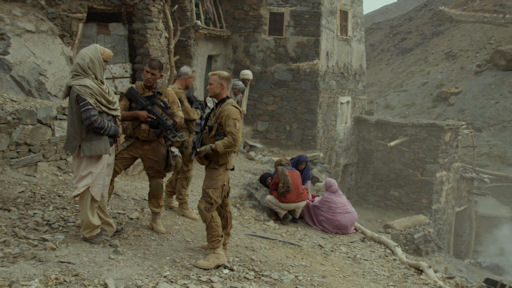