Review: Number One (aka Numéro une)

Emmanuelle Devos may be the one suffering the slings and arrows of powerful and spiteful male colleagues, but there is never any doubt as to who is in control. Her exotic and beautiful exterior masks a deliciously devious mind that is every bit as capable of mayhem as her enfranchised and entrenched competition. Let the best woman win! 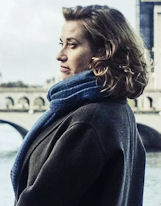 This guerrilla war of the sexes is brought to you by the 23rd Rendez-Vous with French Cinema, co-presented by Film Society of Lincoln Center and Unifrance. Devos plays Emmanuelle Blachey, an extraordinarily competent executive in a government run water company. A bureaucratic institution, the company has few wild hairs, but among them is a blossoming trade with China. What a water utility is doing dealing with China will leave some at a loss, but no matter. Emmanuelle laughs, jokes, wheels and deals with the rich successful Chinese executives. And she does it in high heels and Mandarin, while her spoiled, soft male colleagues stutter pronouncing chow mein.

A vast grid of offshore wind turbines is in the offing, a deal that, unknown to the public, may be needed to save the buttoned-up company from ignominious failure. She has the inside track, but her boss is fearful of upsetting the status quo.

Behind the scenes the women are plotting, aided by public relations powerhouse Vera Jacob (Suzanne Clément) who is a little too smart for her own good. Richard Berry is power drunk Jean Beaumel, a man with the unlimited trust of the top echelons of government. Why this feckless dog has power, we do not know. But that is not important. He gets what he wants through blackmail and calling in seemingly endless political favors. His evil acolyte Marc Ronsin (Benjamin Biolay) gets what he wants by seducing ambitious women and bringing them to the heel of his boss.

The only thing the powerful have in common is that they hate each other. A day without back-stabbing is a day without sunshine. The women are another story altogether. They plan and strategize like the allies on the eve of WWII D-Day. If the men are raging bulls, the women are the time and the tides, gradually wearing away the foundations of their evil foes. Even so, no story would be complete without a traitor here and there, especially a stunningly beautiful one engaged in no small amount of fraternization with the enemy.

Emmanuelle Devos was nominated for a Best Actress Cesar (edged out by Jeanne Balibar for her role in zillion award winner “Barbara”) for her one-two punch of proud beauty and feminine vulnerability in this great movie. Teaming up for a dynamite alliance with Cesar winning director Tonie Marshall (“Venus Beauty Institute”), she is the Rocky Balboa of the boardroom. Benjamin Biolay deserves at least an honorary Cesar for his portrayal of the lowest, stinkiest lounge lizard of the year. Be there or beware.