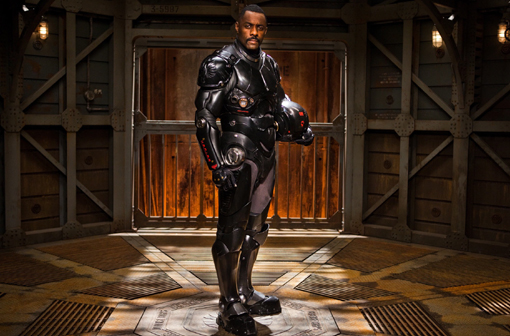 Ever since last year’s Comic-Con panel at which I heard Guillermo Del Toro’s passion about his new project, “Pacific Rim,” I have been excited to see the film. I have been looking forward to seeing the awesome and very visual flair that he would be bringing to this summer blockbuster in which the director takes his love of classic monster movies and mashes it together with massive mecha robots in the ultimate smack down for the survival of mankind.

Although most will know his name from the “Hellboy” series, Del Toro has also been behind the camera for interesting and unique films like “Pan’s Labyrinth” and “Blade II.” However, “Pacific Rim” is a completely original concept that takes the core of a major genre and reinvents it for the modern age.

In the near future, a micro-cosmic fissure has opened a dimensional gateway deep in the bottom of the Pacific Ocean. Giant monstrous alien creatures called Kaiju begin to emerge and decimate our world. When our planes, tanks and bombs fail, the world leaders set aside their differences to collaborate and form a plan to eliminate these alien pests. The Jaeger program is born, wherein giant mechanical fighting robots piloted by two individuals whose minds meld together in a process called the “drift” prepare for battle.

As the years wage on, the war continues and although we are victorious, the decimation caused by the Kaiju and their battles with the jaegers is astronomical. In addition, new Kaiju are appearing more rapidly and are becoming larger and stronger. This forces the world’s governments that fund the Jaeger program to reassess whether or not they want to continue with the program or try an alternative strategy.

The leader of the Jaeger initiative holds out hope that a once heroic pilot who left the program due to personal strategy might return to pilot one of the older models — basically analog while the newer models are all digital — but this may be harder than imagined because he will now have to find someone who he is compatible to “drift” with in order to control the robot. With scientists believing that very soon multiple Kaiju will begin appearing simultaneously, time has run out for the human race and if these next few missions are not successful humanity will have lost the war for planet Earth.

“Pacific Rim” is a massive film in scale, but it is also obviously a very personal project close to Guillermo del Toro’s heart. He has mentioned his love for these genres and you can feel his passion throughout the film. It is aesthetically pleasing and a total eye- and earful – in the best way possible.

While the film may seem to be Godzilla fighting Transformers, it is not that. There are aspects that remind you off those genres, but unlike the “Transformers” franchise, the large action sequences are filmed and cut in a way you can take it all in. They aren’t quick and frenetic at too close of an angle where you can’t see what’s happening. You are in the action close-up, but not in your face where it’s hard to distinguish a robot elbow from a robot leg. That aspect I loved, along with the special effects and visual flair to the look of the film. The monstrous Kaiju and the Jaeger robots look amazing and you can really feel the scale of them in every scene. The fights towards the end of the film that take place in Tokyo are lit by the town’s neon signs, turning the battle ground into a multi-colored smorgasbord of awesome.

What you come to see in “Pacific Rim” are the epic fight scenes, and it does truly deliver on that aspect. The different Kaiju have similar traits and look similar in their color scheme – the film explains why — but each has a different animal aspect. One looks very gorilla-like, another looks like a shark, etc. The effects and how they are rendered is amazing, but one problem I had with them overall is that nearly every fight scene takes place at night, in the rain or out in the ocean or underwater. A few of the Jaeger robots had a similar color scheme, but overall they did a good job of making them stand apart.

I saw the film in IMAX 3D and trust me when I say that this film needs to be seen on the biggest screen possible. This is an example of a fun summer film that is worth the extra price to be seen the right way, because I can see how it would be harder to get the idea of the massive proportions of these juggernauts if you saw it on a very tiny screen. While the 3D is truly engaging and puts you in the middle of the action, it rarely goes into the cheesiness of things flying in your face for no reason. 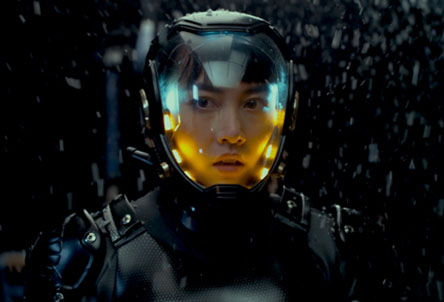 In my opinion, all of the main characters had interesting aspects to them that made them unique and stand out to me. While some had more reason than others to fight the Kaiju, I felt that the driving force behind these people risking their lives every time they went up against these monsters. While Charlie Hunnam, who plays the central character Raleigh Becket, was good as a leading man, I felt he has one of the lesser developed characters. Conversely, Rinko Kikuchi, who portrays Mako Muri, has one off the most emotionally compelling back stories that we saw. Aside from there being a little bit of a language barrier between her and Hunnam, they both seemed to be paired well onscreen.

Another fascinating character with whom I really connected was Stacker Pentecost (played by Idris Elba), the man in charge of the Jaeger program who has his own reasons for trying to stop Mako from joining the team of Jaeger pilots. A few smaller roles –some of which were nearly just cameos — included Charlie Day as scientist Dr. Newton Geiszler, the man studying the Kaiju, and Ron Pearlman as Hannibal Chau, a black market Kaiju parts kingpin who was hysterical in every scene he was in. Some of the other side characters did fall into cliché territory, such as the young hot-headed pilot who was threatened by the arrival of another young pilot and the nerdy scientist who helps save the day.

Guillermo del Toro is great at creating fun movies that make you feel like a kid again, from his science fiction films to the dark fantasies and now with this monster/robot mash-up. The film worked for me because it knows what it is and what people are coming to see and it embraces the wackiness off it all and revels in it. From the ridiculous character names to the over the top set pieces, this film is very aware of all of that and still manages to soar to truly badass at times.

The simple human element could have been stronger with more character development, but this film is about the action and every major set piece is amazing. There was massive foreshadowing and probably too much on camera exposition that felt it had to explain everything to the audience — which really slowed down the pace at times — but when the robotic fists started flying you knew you were in for an awesome time.

“Pacific Rim” works on so many levels and while it has its faults and might run slightly longer than it should, Guillermo del Toro has created a great time at the movies. He has already announced that he is hard at work on writing a possible sequel so we can look for a possible franchise from “Pacific Rim.” The movie isn’t perfect but it delivers on what people want, massive large scale action with creatures from another dimension fighting giant robots. If you liked “Transformers” or “Gundam Wing” with a mixture of “Godzilla” and “Cloverfield” mixed in, then this movie is for you.