“Solitary” by filmmaker Kristi Jacobson (“A Place at the Table”) is one of the most eerie and troubling films you will ever see. The prison itself is a nether world of locked boxes with almost no visual access. Each pod is a cacophony of yells and banging combined with guards managing the minimum possible contact with inmates. When inmates leave their cells, for an hour, several times a week, they are shackled hand and foot and escorted by two or three officers from Point A to Point B. There is no conversation. Everybody knows the drill and the drill never ends. 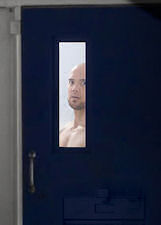 Jacobson did the impossible when she obtained access to Red Onion State Prison in Virginia, a custom built “supermax” prison that contains the next thing to outlawed dungeons. There are almost no communal areas, only a few recreational steel cages outdoors where inmates might get to exchange a few words with one other person. They are locked in solitary for 23 hours a day. Their total experience of the outside is a heavily frosted bullet proof 10-inch-wide window and their only view of the inside is an even smaller break-proof portal on the edge of their cell. The prison contains some 500 8-by-10 foot steel and cement rooms, each with bed and toilet. This space becomes the inmate’s entire life.

Inmates are not sentenced to supermax, they are sent there by prison officials based on their negative behavior at more conventional prisons. Conversations reveal they are deeply troubled persons guilty of a series of the most heinous crimes. Most apparently have been judged on the competent side of insanity. Or perhaps they are there because the state does not have adequate facilities for the criminally insane. The question the film asks is whether they are being rehabilitated or are simply being driven more insane by being nailed into living coffins.

The guards interviewed are long term local residents who would be working in the coal mines like their fathers if the mines were still open. They are good people who do their jobs, moving inmates and dealing with behavioral issues, like they would haul coal out of a seam and up a lift. They do not report being happy with the mechanistic nature of their human logistics, but they did not make the rules. They can work at Onion or leave their friends and families and go elsewhere. From what the conversations reveal, none of them knew what they were getting into when they took the job. There is no way a person can know. PTSD creeps into their lives as antisocial psychopathic loneliness creeps into the lives of the inmates.

The cinematography inside the prison is riveting. The camera moves as on an assembly line warehousing and monitoring radioactive waste or decommissioning germ warfare artillery shells. There are no mistakes. Every possible movement of a person, door, wall, food opening, push button, chain, shackle or handcuff is dictated by a protocol and witnessed by at least two, and often four, prison officials. Fortress-like passages close with a soft metallic seal that echoes the mental barriers society has instilled between each inmate’s mind and a normal life. Everything is a hundred times as strong as any man.

Do not miss this devastating and critically important look inside the ‘hood of America’s failure. As one inmate says, “You’re not in prison, you’re just away from life.”