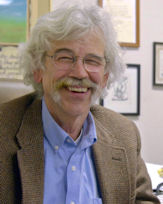 I want to sit across the table from Art Cullen at the Better Day Cafe in Storm Lake, Iowa. I want to talk about the danger of news deserts, the difficulties of investigative journalism, and what he thinks about Alexandria Ocasio-Cortez for president. I also want to have the $5 eggs and pancake breakfast special.

In addition, I want to find out how Cullen happened to win the 2017 Pulitzer when his paper only has a circulation of 3,000.

“Storm Lake” is a down-home documentary about the life and times of a small town (population: 10,000 to 15,000), family-run newspaper during challenging times. For the last 15 years or so, folks throughout America have increasingly been wanting to receive the news for free and they get that on the internet or on TV.

You pay for what you get.

Twenty-five percent of all American newspapers have folded in the last 15 years. When the pandemic hit, the small mom and pop stores and restaurants closed down. This meant they had no need to advertise and the very sustenance of all American newspapers was even more greatly challenged. “The Storm Lake Times” opened a Go Fund Me campaign to try to make it through the hard times.

“Storm Lake” tells the story of why the survival of newspapers, as opposed to all other media sources, matters. It shows why “a town will be as strong as its newspaper and bank.” It also shows the courage of Art Cullen, a news editor who consistently challenges the powerful agricultural corporations with “impressive expertise and engaging writing.”

“Storm Lake” also includes the 2020 presidential campaign, when most of the candidates paraded into Storm Lake. Covered by “The Storm Lake Times,” Cullen and crew get a first-hand view of who’s who. Andrew Yang sagely asks (and responds): “You know what doesn’t work if you don’t have a local newspaper? Democracy!”

“Storm Lake” was directed by two outstanding filmmakers, Jerry Risius and Beth Levison. Risius, a 20-year documentarian, was brought up working on a farm in Iowa. After graduation from the University of Iowa, he joined the Peace Corps (Ecuador). Levison is an Emmy and Peabody-winning producer/director based in NYC. Together, they have created a delightfully informative film about an otherwise grave threat to truth, community and democracy.

“Storm Lake” opened in theaters nation-wide on Sept. 17 and will debut on PBS in November.