Every once in awhile a film comes along that haunts you, nags at you and consumes you. That is exactly what “The Florida Project” does, whether it is intentional or not. The 2017 film was directed by Sean Baker and flew under the “popular general audience.” Willem Dafoe garnered an Oscar nomination as Best Supporting Actor, and deservedly so.

“The Florida Project” follows the day-to-day life of Moonee, as the six-year-old traverses her life at the Magic Castle Inn & Suites ultra-low budget motel where she lives. The fact that the motel is adjacent to Walt Disney World Resort lends itself to an alternate “kingdom” of fun and escape; a world that Moonee has created for herself and her ragtag group of friends despite her circumstances.

The movie unfolds as Moonee shows the full color spectrum of her childhood. She is brash, uninhibited, in-your-face, and has little-to-no respect for adults or authorities. It is easy to see why Moonee is the way she is. Her mother Halley (tragically and brilliantly acted by Bria Vinaite) has been in jail in the past, has little regard for her daughter and is teaching Moonee almost every unethical and questionable thing there is. The viewer is left to assume that Halley is simply a product of her own upbringing.

Moonee’s friends Scooty and Dicky live in the same motel and are pretty much left to their own devices with little parental guidance or control. It’s fun to watch as they seemingly have the run of the motel and surrounding neighborhood. The trio quickly finds trouble while getting into a spitting contest at a nearby budget motel where they meet Jancey, and they all become fast friends.

As we get to go on adventures in and around the motel, we meet Bobby (Willem Dafoe). Bobby is the manager of the slum motel but paints it a vibrant lilac color with a castle motif to try to elevate the appearance so it might compete for tourist dollars amidst nicer properties around Walt Disney World. He clearly understands that his motel is slum-like, but he does an admirable job of trying to keep up on maintenance. He also protects those that live there, especially the children. He is a sympathetic character that is doing his best and does take pride in his work. In one particular scene, Bobby shows his savvy and demonstrates just protective he is of the children who live at the motel.

After their friend Dicky moves away from the motel, friends Moonee, Scooty and Jancey become a tight trio, traversing the landscape of their surrounds with an undeniable sense of adventure. Utilizing some unique wide-angle camera work, the grandiosity of childhood is portrayed as Moonee and her friends go for ice cream, obtain food from a charity truck, routinely score free food from Waffle House and create exciting moments for themselves nearly everywhere they go.

After a destructive and sad turn of events, Scooty is forbidden by his mother to play with his new friends Moonee and Jancey. With that move, the source of free food from Waffle House also dries up, creating another financial burden for Moonee’s mother, Halley. Money is scarce and Halley is always a day late and dollars short on weekly rent. The viewer realizes how Halley is making some legitimate money and without spelling it out glaringly, discovers the source from which the rest is being procured.

As Halley becomes more desperate, she places her daughter in a horrible position, although Moonee is relatively oblivious. Manager Bobby tries to protect Halley and Moonee but deep down, he knows this is a bad situation. Halley soon unleashes her wrath on a motel friend who has cut her and Moonee off from food and friendship and things start to unravel quickly.

Child Protective Services soon intervenes, and Moonee’s world is on the cusp of forever changing. Or is it? In the only instance where Moonee demonstrates a correct emotional response that would be appropriate for a child of her age in that situation, she goes to Jancey and they embark on yet another final adventure. Where they go and what happens is a compelling yet imperfect childhood “bow” that completes the film and leaves the viewer hopeful once again for the future of the two friends.

A Masterpiece Film
“The Florida Project” is a testament to the skills of director Sean Baker, cinematographer Alexis Zabe, production designer Stephonic Youth and set decorator Kurt Thoresen. In “The Florida Project,” the creative group transports you directly into the action and makes the viewer part of the claustrophobic, smoky, dirty and dim life in the motel, and the sticky, messy, sassy and delicious moments of childhood and a greater sense of wonder that Moonee has created. Baker makes the viewer a “friend” of Moonee who is simply along for the ride.

It is unfathomable that as Moonee, actress Brooklynn Prince had literally no acting experience before “The Florida Project.” She carries the film as nothing less than an elite acting veteran. Prince’s performance captivates, charms and commands every second of the viewer’s attention while portraying a character that is compelling and tragic, yet filled with wonder and hope. Likewise, the actors who portray Moonee’s friends in the film, Christopher Rivera as Scooty and Valeria Cotto as Jancey provide stellar performances. Both of these child actors also had no acting experience before taking on these roles. The resulting performances by all the children is simply breathtaking and demands a look at the work that Baker was able to get from his novice actors.

As Bobby, Willem Dafoe indeed plays second fiddle to actress Prince, and when the two have scenes together, it is remarkable. Dafoe’s performance conveys a feeling of being “trapped,” but hopeful, much in the way that Moonee lives her life. Although the celebrated veteran actor could have easily outshone anything and everything that was happening in “The Florida Project,” Dafoe simply became his character and let the children and the story shine, providing brilliant punctuations of acting along the way.
To fully understand the title of “The Florida Project,” just Google the term and let your mind connect the dots and find the meaning. 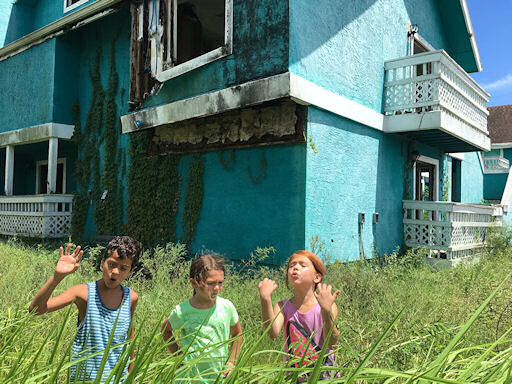