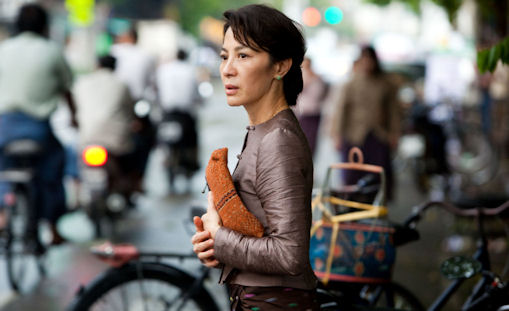 Critics be tarred, feathered, hung and shot. Of the 150 films I have reviewed in the last three years, I have given few rave reviews, but “The Lady” would be in those top three. The reason is simple – it’s an important story about principle, sacrifice and being true to something greater than oneself.

Even though “The Lady” has received weak reviews, don’t let that affect your decision to see one of the most timely and important films of our time.

Many people already know the story of Aung San Suu Kyi and Myanmar (aka Burma). Daughter of beloved assassinated leader returns to native country after ironically marrying a Brit, homeland of the once occupying force her father had replaced. The people ask her to free them from the ruthless military leadership that killed her father. She is put under house arrest and told by the ruling junta that she can leave any time to return to her family in the UK. However, the clincher is that if she leaves she can never return.

Supported ideologically by her husband, she chooses to support hopes for democracy and human rights for the oppressed people of her country. Her family is granted only brief visitations and accepts the Nobel Prize in absentia for her. A last insult comes when her husband is refused a visa to see her when he is terminally ill.

That’s the bare bones storyline. But still more dramatic is the ideological side. Suu Kyi has been compared to Mahatma Gandhi, Martin Luther King and Nelson Mandela. Despite dangerous government opposition, she traveled throughout Myanmar to unite people of all tribes and political persuasions to vote for democratic changes and human rights. She faced down and triumphed over one of the most brutal regimes in the world.

“The Lady” brings up universal moral dilemmas that involve conflicts between the state and moral conscience that remain relevant today.

As of this month, having been freed from house arrest and winning the April first election as the opposition leader in the Myanmar Parliament, Suu Kyi has united with 42 other elected members to protest an oath they must make (before taking office) to safeguard the constitution they had campaigned to change. So Suu Kyi is once again in political limbo.

The sets (in Thailand) for “The Lady” are grand and the acting of Michelle Yeoh as Suu Kyi and David Thewlis as her husband, Michael Aris, is outstanding.

However, a weakness with “The Lady” is that more can read about Suu and her husband, Michael Aris, online than Rebecca Frayn reveals in her limited, idealizing script.

Missing is the amazing background on Aris, explaining that he was a tutor for seven years for the Bhutanese royal family, that his courting with Suu was done through correspondence, that they spent their first year of marriage in Bhutan and that they both had Ph.D’s. Missing was the marriage proposal where Suu makes it clear that she would say yes only if Aris agreed that if her country ever needed her she would have to go. Missing were the ideological conversations between Suu and her husband that educate the audience on their common political and Buddhist commitments. Missing was the picture of Suu that hung above her loyal husband’s bed during their 21 years of separation.

Aside from all that, great films for me are those that are important. They handle timeless themes and insightful content that educate and enlighten. There is certainly more to know about Suu Kyi and her personal life. But the idea of going beyond a preoccupation with the self and embracing a path that works at creating a better life for others without unrealistic accoutrements — this is what brings value to a film and catapults “The Lady” to a 10 out of a 10.