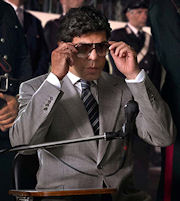 One person’s savior is another person’s traitor. An old school Cosa Nostra lieutenant turns on the family in this narrative fiction remake of the true story of the first mafia informant in Sicily in the 1980s.

As the film tells it, Buscetta described himself as a “simple soldier” and did not have high ranking official authority. Nonetheless, he was involved in the highest levels of organized crime on three continents and knew where all of the bodies were buried. After the mafia murdered several members of his family, he lost his allegiance and set up the 1986 Maxi Trial in Palermo, the largest anti-Mafia trial in history.

Director Marco Bellocchio has a taste for the unconventional. His disturbing “Fists in the Pocket” served notice to 1965 viewing audiences that he was not about to romanticize the brutal side of the human condition. Opening as a “Godfather” knockoff, the movie quickly moves in a different direction. There is no suave, courageous cunning and stoic loyalty, only the constant fear of betrayal. These people are not here by choice, they are cursed. Tommaso Buscetta (a stunning Pierfrancesco Favino) buffed and moving in the richest, albeit most corrupt, circles in the world, is barely maintaining.

Although he controls a huge proportion of the heroine flowing into Europe, his son is a hopeless addict who can barely stay on his feet. He has put himself in the middle of a battle of elephants and has committed the second worst of mafia sins, acted above his station. The worst sin is soon coming. He loves Sicily as his only home but he will be getting a new identity and starting a life in America where he will be a husk, a man without a country.

While the mafia destroyed the lives of hundreds of thousands with illegal drugs, gambling and prostitution, Buscetta’s friends, family and much of Sicily looked to them for support when nobody else cared. Left to grinding poverty after WWII, with no educational, health care or economic infrastructure, the island was forgotten as Europe reclaimed world power. Resorting to the dark world of criminal enterprise, the mafia provided more support for southern Italy than the rest of Italy, and the world, combined.

In testifying against the mafia, Buscetta was considered a genuine traitor to his brothers and sisters. He gleaned no glory in what he did and the unvarnished truth is that his testimony barely touched the true leaders of organized crime, high level political officials. The circle of corruption starts with citizens breaking laws and then electing officials who enable that self-destruction while proclaiming the righteous morality of literal law.

The courtroom scenes are funny and heartbreaking as top level mafia generals quarrel and trade insults in front of heavily robed inquisitioners. Even as they fight as siblings of the same horrendous father there is an air of comedy in the court. Everybody knows that what is wrong is right and, as the Stones put it, “…every criminal a saint.” The true devil is leading the country at the highest kevel, and his minions are the “honest” everyday people who take drugs for fun.