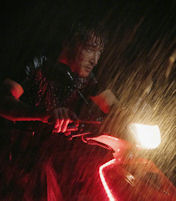 Brooklyn is far away. These are the mean streets of Wuhan, but a man still whacks a wallop and a woman still understands a good slap in the mouth or a slug from a .45. Small-time mob boss Zhou Zenong still gets up every day to the rackets only instead of nickel numbers it is Ducatis running 50 thou. Instead of Robert Mitchum’s ’57 Ford with six gun blasting, it is bikes doing zero to 150 in ten seconds and robot razor swing arms that take off a biker’s head faster than you can say Corona virus.

The set-up is there in spades. Mitchum took it slow and easy until he hit the gas with his car full of devil’s brew and G-men on his taillights. Zhou gives night classes in how to jam the theft transmitters on Kawasaki Ninjas. Could it be the same? Sure, if smart phones had party lines and bit coins were stacks of filthy 20s stained with blood from a leaking gut wound. Otherwise, no way, pal.

Even so, there are seething hot scenes staring down into Hitchcockian courtyards in impossibly overcrowded Chinese tenements. That set-up is better than any rear window Jimmy Stewart ever gazed out of. The complexity of a puzzle so irreversibly evil it will take more than a strong arm and a fast gun to make it right. These are not people, these are gangs. This is not a cheap con or bag of loot from a strong arm shakedown, this is organization, this is technology, this is teamwork.

Tough, there is too much going on to concentrate on the demise of the unfortunate Mr. Zhou. Too many moving parts to get into the noir soul, the man fated to fall victim to that most human of emotions, to be sacrificed on the alter of love, a last kiss, and black ink on the bottom line.

Harsh, bare lights make the most excellent shadows, plastered on the walls of stinking garbage filled alleys, dead ends in more ways than one. Now we are talking, a “Double Indemnity” reward, with a nice twist. The final meeting with the murky water of the lake. No more bathing beauties here, they were just sluts anyway; a stagger, a gasp.

It is no “Touch of Evil,” but these guys are learning. As the camera races through neighborhoods where no sane person would ever go and poor shop keepers struggle to survive in poverty and humiliation, noodles are choked down in a greasy spoon last meal and Mary Poppins’ umbrella is violated in a way that rates some kind of award, but it is impossible to say what kind. Delicious extended takes nod to Italian neorealism and are, amazingly enough, thrilling. Superb performances all around, but the energy is not there to grab and hold western audiences. It is just as well; we will always have Paris. 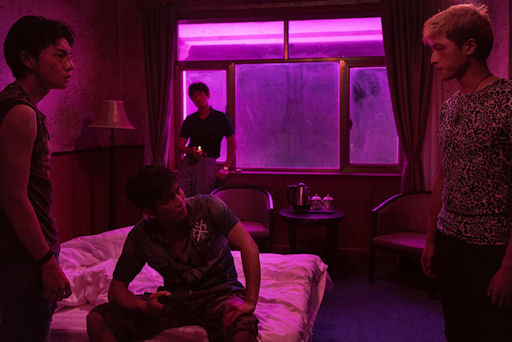