Debut feature director Rupert Goold pulled one out of the hat with “True Story,” an amazingly entertaining dual of wits, and lies, between two men who are world class in the art of deception. 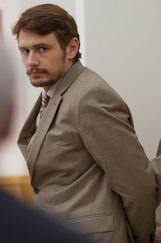 At the heart of the film is the weakness of the human soul when it comes to sorting out right from wrong and success from failure. As the semi-honest reporter Michael Finkel (Jonah Hill) matches wits with sociopath Christian Longo (James Franco) the audience is at wits end to decide who is the bearer of the truth and who is hawking lies.

Based on the memoir by Michael Finkel (screenplay by Rupert Goold and David Kajganich) this is the story of the trial, imprisonment and eventual confession of Longo, who was accused of murdering his wife and three children around the turn of the millennium. In the course of his arrest and pre-trial imprisonment, Longo used Finkel’s name for cover during his brief flight to Mexico to escape justice. When he was apprehended and brought back to the USA, Finkel heard about the subterfuge and contacted Longo hoping for a story.

As the screenplay goes, Finkel needed a pot-boiler of a tale to get him back into the mainstream of feature journalism. Although he was not a fibber on the level of, say, Stephen Glass of The New Republic (see Billy Ray’s “Shattered Glass” of 2003), his mix-up of enslaved and beaten Africans was apparently enough to get him drummed off the New York Times staff in spite of a stellar early career. Longo needed someone to help him flesh out a believable story that would at least sow enough doubt in the minds of the jury so as to save him from the Big Transfusion.

Although the screenplay is uneven, the important parts of the trial and prosecution are compelling. There are details that drift in and out of the narrative that do not seem to fit in anywhere and could probably have been left out. This is not a polished work. Nor is it a slickly produced exploitation of two tragically unfortunate souls. The key to the success of this movie lies in the heartfelt feelings that the lead actors bring to the screen. The lines are spoken slowly and deliberately, as if everyone is petrified of the truth. Justifiably so.

This disturbing mixture of murderous treachery appears to have formed the cauldron of success for Goold, Franco, Hill and supporting actress Felicity Jones. Between the four of them they have put together a film that is remarkably simple in its approach and yet riveting in its exhibition. Franco and Hill develop a thunderclap of screen chemistry as they dare one another to reveal some deep seated truth about what they did and what they are doing. Until the end, neither is willing, or able, to confront what they are and what they did.

This is a must-see movie for anyone with a fragment of appreciation for the strange and deviant in human nature and an occasional appetite for unabashed pulp fiction. Bring a strong stomach for some R-rated photographs.