In the Dardenne brothers’ David vs Goliath drama “Two Days, One Night,” Sandra (Marion Cotillard) is a young wife and mother working for a small manufacturing business in Seraing, Belgium. She takes medical leave for a nervous breakdown and is about to return when she hears she has lost her job. She is not notified by the company, she is told by a friend. 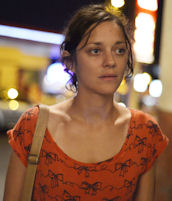 Unbelievably, and despicably, the company has held an internal vote of the employees on whether to give them all one thousand Euro bonuses and lay off Sandra, or keep her on and give them souvenir flashlights for Christmas. The bonus won and Sandra lost.

This is one sleazy outfit, all the more so since they are “green” and manufacturing solar panels for the good of mankind. So starts this crucifixion of the modern corporation and the celebration of the fighting worker. When Sandra gets the news, she confronts the company manager/owner about what a back-stabbing scumbag he is. Well, OK, she is more diplomatic than that. Downright touchy-feely, really, considering another person might have just had the guy whacked. He agrees that the bullying kangaroo court of intimidation that he held in her absence could be repeated as a secret ballot on Monday.

She has two days and one night over the weekend to convince a majority of the 16 employees to see it her way, give her back her job and pass on the check for the thousand Es. Obviously, she needs the job. The combined earning of she and her husband are barely enough to pay rent and feed them and their child. As the story progresses, we learn that almost everyone else in the company is in the same situation.

The head man in the company is treated as a cipher, just a rich guy trying to get along and not deal too much with the proles. The real cad is Sandra’s nasty supervisor Jean-Marc, who glowered at every employee with stares of daggers as they wimped out and cast their votes in the first referendum. Two time César nominee and Cannes Best Actor winner Olivier Gourmet takes on this villainous role with relish as the Dardenne brothers conduct in the background.

But that is not the real story, which is Sandra and her saint of a husband, Manu (Dardennes frequent collaborator Fabrizio Rongione) traveling from person to person and entering into personal discussions with them to gain their support and give up their bonuses. As it turns out, not surprisingly, most of them are in the same fiscal, and social, position as Sandra.

Even though she helped a young father (Timur Magomedgadzhiev) when he started with the company, he voted against her anyway. He is shamed to death and agrees to help out, barely. He turns out to be the easiest one.

It is the interaction with Anne (Christelle Cornil) that lifts the film to the next level. Anne would help, but her tyrannical, violent husband will not hear of it. This is where the David vs Goliath story morphs from the worker vs. capitalism story into a woman’s rights story. The screenplay returns full circle to Sandra, as a woman, losing her job in a company run by men. She is further blocked by a violent husband dictating to his wife.

By the end of the screenplay, when the vote is taken, Sandra realizes that most of the fun of the vote was getting there. Bed-ridden a month earlier and riding a roller coaster to Xanex addiction, she has found a strength in herself she never knew she had. Even better, she has created strength in her co-workers that they never knew they had.

In the end, this is not a story of the worker vs the company, it is a story of strength through unity and the beauty of the realization that humans, as social animals, have an inherent need to stick together. The underlying message is that this unity is inherently the enemy of the well-oiled machine. That judgment will have to be left to the viewer.

This is a lean, no-nonsense film crafted in the best, most brutally honest style of the Dardennes with a stellar performance by Marion Cotillard.