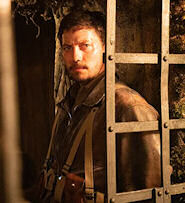 It was a dark and stormy night. With crows.

Let’s set the scene: It’s early 1945 and the war in Europe is nearing conclusion. Hitler’s Germany is desperate. Soviet troops are advancing from the east, while the Americans and their allies are closing in from the west. However, the Fuhrer may have a last trick up his sleeve.

This is the premise that sets “WarHunt” in motion. There have been stories over the past eight decades tying the Third Reich’s high command to ancient beliefs in witchcraft and demonology. Fun stuff, and far less harmful than the horrendous reality of Nazi barbarism.

An American cargo plane is flying west over Germany’s Black Forest. On board is the crew and an officer with a sealed case containing sensitive material. Suddenly the plane is enveloped in crows, which blow out one engine and send the plane hurtling to the forest below.

Sgt. Brewer (Robert Knepper – “Homeland,” “Twin Peaks,” “Carnivale”) is on patrol outside enemy lines when he receives orders to rendezvous with Maj. Johnson (Mickey Rourke – “Wild Orchid,” “Barfly,” “Angel Heart”). There is a dark history between these two, revealing Brewer’s extreme loyalty to his men. Johnson orders Brewer and his platoon to go behind enemy lines to retrieve that sealed case from the downed plane. He also adds, against Brewer’s wishes, his “protege” Walsh (Jackson Rathbone – “The Twilight Saga,” “Finding Carter,” “Aim High”). From this point on, the story follows two tracks: Brewer and his soldiers making their way through the very dismal, frigid, and generally unpleasant crow infested forest, and Johnson, back at his headquarters, keeping track of their progress.

It soon becomes apparent to Brewer that things are not what he expected. Nazi soldiers are found hanging from trees, their bodies stuffed with crow feathers and inscribed with mystic symbols. A mist-shrouded windmill appears, wherein two women bathe, much to the delight of at least one peeping GI. The platoon becomes disoriented, retracing their path through the forest instead of making toward the crashed plane. Later the same soldier who saw the bathers has a meeting with a woman in white fur, who shows him the crash site, seduces him, and then dies at his hands for reasons explained later.

The film continues, things getting more and more bizarre while back at headquarters Major Johnson is explaining to an aide that there is witchcraft involved and that a precious volume of ensorcellment, dealing with immortality itself, might fall into Hitler’s hands if the mission doesn’t succeed. The result of mission failure? An immortal Nazi army.

The soundtrack, written by Tao Liu, is haunting when needed, and becomes exciting and driven in the action sequences.

Performances by all are realistic, especially Knepper as the embattled and increasingly distraught platoon sergeant. He has led his men for two years without a casualty, but now he is helpless to protect them. Director/Writer Mauro Borrelli (“The Recall,” “The Ghostmaker”) has coaxed credible performances out of all concerned.

This is an interesting film. The initial scenes are reminiscent of many other doomed patrol films of the genre, but the acting and the innovative twists in the second half make up for the cliché’d first half. Design, cinematography, special effects and editing are excellent.

“WarHunt” is not for everyone, but for those who enjoy the mix of modern era soldiers on a perilous mission and an intriguing horror story, it is an enjoyable 93 minutes. It’s in the tradition of Overlord (2020), Ghosts of War (2020), Frankenstein’s Army (2013), and many more. Moderate gore lovers will be satisfied, while those preferring more subtle representations won’t be overwhelmed.

As far as I know, no crows were harmed during the making of this picture. 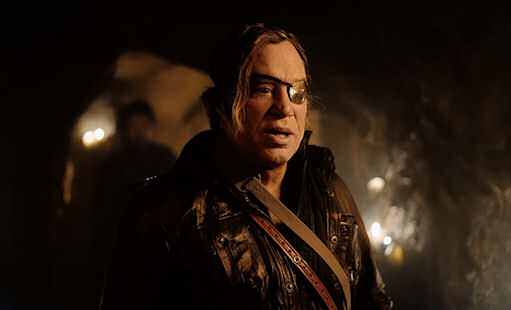