If you were to grow a couple of extra appendages, wings for example, imagine the tipsy exhilaration of the first flight, the excitement at the expanded potential and the joy in the practice.

“We Grew Wings,” a bow to Nike’s support of the University of Oregon’s sports program, celebrates this kind of euphoria that Title IX, the ground-breaking equity-maker for women in American athletic culture, brought to women’s sports programs in the United States. The University of Oregon track and field program, featured in this doc, is a great example of the impact that came when the floodgates to women’s athletic competition were opened.

Helping to write this review is Mary Ann Hodge, a sports fan who has lived in Oregon during this time of transformation. We’re both of an age where we can remember being prohibited from wearing pants to school, discouraged from running for male-dominated leadership positions and not allowed to use the boys’ exclusive sports equipment. Girls were given big brick red rubber balls to dribble and the concept of a girls’ sports team, outside of tennis, was inconceivable.

Then there was Title IX, an amendment to the Higher Education Act of 1972, which stated that “no person in the U.S. shall be denied benefits or be subjected to discrimination under any educational program or activity receiving federal financial assistance.” However, men and women alike were still asking, “Who’d want to ever watch second-rate athletes compete?”

Through a series of interviews and videos juxtaposing the U of O women who originally broke the ground in field and track with the current young track athletes of the last 5 years, this film clearly shows the dramatic effects of Title IX. However, the road to being on a par with male athletes, insofar as recruiting, funding and school value is concerned, has not been easy.

Put succinctly by one interviewee, “In 1961 college women athletes had to pay their own way to meets, there were no feeder programs through the high schools and their track shoes were made with waffle irons.” Put candidly by another, it was considered an anathema to have women and dogs on the field, which was considered the sacred territory of the men’s track and field team.

Both track great Mary Decker Slaney and Oregon’s Steve Prefontaine are noted for their influence on women’s college track and field programs with rare and wonderful film clips of 14 year old Slaney and “Pre” together as mentor and competitor on the field, as well as Slaney interacting as a mentor and inspiration herself to the U of O women track athletes of today.

A tribute is also made to Bill Bowerman, who in 1964 returned to the U of O from New Zealand with exciting accounts of the popularity of “jogging” in that country and how both sexes participated. He used this experience as a sling shot for making the women’s track program at the U of O a part of the Athletic Department by eliminating it from the PE program. This bold move was a pre-cursor to the rise of women’s athletics in general at the school.

There is a wonderful “Ah-ha!” moment when a current male track star at Oregon reveals, in regards to the current winning tradition of the U of O women’s team today, ”We just try to mimic them.”

From dramatic wins, losses and injuries to poignant accounts of personal struggles, this film accomplishes what it intended to do—to tell the story of the effects of perseverance against the odds, triumph of personal will and determination to build the incredible women’s track and field program that, thanks to Title IX, Oregon and schools across the country boast today. 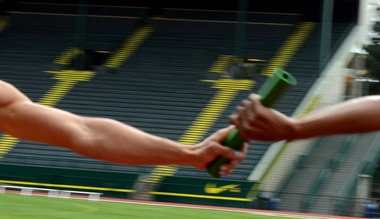