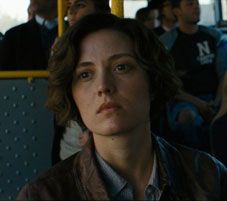 Using the vehicle of a do-good doctor in the conflicted, divided territories of Israel and Palestine, “Inch’allah” mines the roots of passion, the role of the international community and the perpetuation of a circumstance compromising all involved.

Bookended with the irony of cooing doves and an explosion, the film colors in how a peaceful, innocent scene came to be corrupted with unforgiving, indiscriminate violence.

Welcome to the Middle East, the epitome of unresolved conflict. Chloé (sensitively played by Evelyne Brochu), a French-Canadian doctor, has signed on to work under a French physician at a Red Crescent clinic for pregnant women on the Palestinian side of the separation barrier, the great wall separating Palestinians from Israelis.

While Chloé lives on the Israeli side, she works in the Palestinian zone.

Like the international community, wanting to sustain both areas with protection and humanitarian aid, Chloé is torn between her sweet neighbor and great friend, Ava, an Israeli border guard, and her passionate, brooding boyfriend, Faysal, a small businessman, and his family.

Chloé, like the international consortia of NGO’s, has a love, understanding, respect and connection to both sides of the wall. She wants the best for everyone. She is assuaged (or warned) by her best friend, Ava, that their conflict is not her battle. However, as a doctor with a compulsion to fix things, she is drawn into the muck like a moth to a flame.

Interesting is the interspersal of Skypes with her mother back home in her quiet, clean, tidy Canadian neighborhood nestled on a peaceful river. The further she is drawn into the Arab-Israeli conflict the more withdrawn she becomes from her mother, her center, her balance, and her true voice.

In essence, what happens to Chloé parallels the emotional struggle of the international community in respnse to the persecution and genocidal conflict occurring in the birthplace of our respective spiritual centers.

However, what has already happened to Faysal (truly personified by Yousef ‘Joe’ Sweid) is what irrevocably frustrates Palestinian men – a perceived emasculation by the western world.

To illustrate this problem, here is a conversation in a scene where Chloé, through negotiations with Ava, has brought Faysal and his family to the ruins of their once-owned home.

Faysal to Chloé: Why did you bring us here anyway?
Have you ever had something stolen that you can’t replace?
Would you like to see your house and it’s gone?
Faysal’s mother makes an exclamation.
Faysal to his mother: What, do you feel better now mom?
Helps you remember what you’ve lost. Great, huh?
You. You can tell your son what losers we are. Fantastic.

Inch’Allah, the French version of the term In’sha’Allah, is generally said after a stated hope for some future event. The phrase qualifies the desire with a humility, recognizing that the wish will only come to fruition if God is willing.

So, are the filmmakers implying that God is willing the Middle Eastern conflict? Or is life a stage where we are all inevitable participants with choices throughout our lives for good or evil, succor or pain, reason or abandoned passion? Or… are we capable of making choices at all? Are they all foreordained by a higher power?

Or are there other questions to ponder? Is it the politicians, the entrepreneurs, the do-gooders and the religious with their open purses for both sides who stir this middle eastern cauldron? Would it still be boiling without our kindly attention?

I predict this outstanding film will be an Oscar contender for best foreign film. Like their two prior award-winning works, “Incendies” and “Monsieur Lazhar,” the French-Canadian production team of Luc Déry and Kim McCraw has chosen to support a film strong on story, honest in acting and universally complicated but resonating in theme. Writer/director Anaïs Barbeau-Lavalette has submitted a film over-flowing with intelligence and nuance.