Review: Where Do We Go Now? 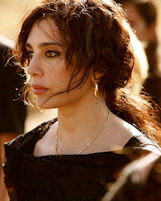 A funeral stomp in the midst of the unrest in Lebanon sets the stage for this Middle Eastern musical comedy. The women, chanting, stomping and swaying in unison set the stage for the best solutions to conflict you’re ever going to see on film. Set in a traditional little mountain town, the village women try creative ways to keep their Muslim and Christian men from destroying each other in the civil war that is overtaking Lebanon. In desperation they apprehend Russian showgirls and local hashish to distract their men.

Nadine Labaki, a creative prodigy from Saint Joseph University in Beirut, first won recognition with her graduation project, which won the 1998 Best Short Film Award at the Arab World Institute in Paris. Since then her success has expanded to music videos, screenplays, directing, acting and in this film participating as the producer, director, writer and lead actress.

Prior to 1969, the Lebanese prided themselves for being the only place in the Middle East where Jews, Muslims and Christians accepted one another. They called their little country the Switzerland of the Middle East. Their game was commerce and their success was trade. Business was the bridge that kept them working together. Class distinctions were related to financial acumen and religious differences were respected.

With the intrusion of Hamas, a politicized extremist organization, a destabilization occurred and the educated elite fled. But up in the mountains, where Labaki plays a Christian bar owner, those who have remained are frustrated and ready for a fight.

With typical sarcastic Lebanese humor, Labaki exaggerates the pure ridiculousness of the village arguments. Intrigue results over which TV channel to watch. Fights break out over who left a door open. A statue of the Virgin Mary sheds real blood.

Just when the audience forgets this is a musical a number weaves its way into the dialogue and the meaning of a scene is extended through a spirited song and dance.

War is ridiculous. Get over it – grow up – communicate – work together – enjoy your family – enjoy life. These are the basic tenets of Lebanese life and universal tenets of a stable community. But getting there is the problem, and the women of this village have to use their creative, devious minds to come up with a final successful plan to get their men to stop fighting.

A narrow, rocky, winding earth bridge is the only access to this village. It is this pathway that the TV comes on a bike, the Russian sexpots traverse with high heels and Labaki uses as a grand metaphor for the women who are trying to bridge the trouble in the town, in their lives and in their country. You will love this film from the beginning funeral stomp to the surprise set of solutions these Muslim and Christian Phoenician women devise together.

Showing Feb. 11 and 13 at the Portland International Film Festival