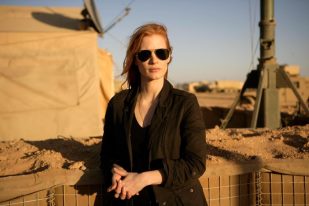 You’re right there. The camera has night goggles. You arrive at 12:30 a.m. and it is quiet. The Pakistani community, with its own rendition of West Point within a mile, must hear you. But the two experimental Sikorsky Black Hawk helicopters’ low hum is deceptive. The compound in Abbottabad is dark and locked. No one’s answering any rap at the door. It is exploded. Everyone around has gotta’ hear that.

It is unmatchable – like nothing you have ever witnessed.

This extraordinary inside story of “the world’s greatest manhunt for the world’s most dangerous man,” as filmmaker Kathryn Bigelow puts it, begins with the recorded voices of those trapped in the Twin Tours. Developed through the extensive research and magnificent writing of Mark Boal, once a journalist for The Village Voice and Rolling Stone, “Zero Dark Thirty” is, as Charlie Rose points out, “movie journalism” in pinnacle form.

Boal collaborated with the genius of filmmaker Kathryn Bigelow to bring history into vivid, realistic life. We believe we are there, through the eyes of the unwavering tenacious presence of Maya, brilliantly played by Jessica Chastain, the CIA op who doggedly pursued her leads and briefed the SEAL team on its mission.

The entire film sticks to your insides. You are impacted and come out of the theatre altered – just a little bit. You have been privy to the workings of the U.S. government after the 9/11 attack. You are taken through the initial interrogations and torture.

But when is torture okay? How much, what kind, and for how long? Chastain’s sad slump is our own reaction. We are devoted to eviscerating the al-Qaeda ring – punishing and preventing further attacks, yet we are sickened by the torture that gives very little information.

Instructive is the sequence where the guy talks, not because he’s being humiliated or shut in a box, but because he’s guaranteed a choice of incarceration in Israel or in Pakistan. As I was viewing the first scenes on torture, I was upset, thinking this section should be left out, glossed over or made less explicit. It means it gets an R rating and the kids who need to know, the ones who are deciding on a military career, the ones making up their minds on what they support and don’t, won’t be allowed in a theater without a parent.

But 10 days after seeing the film, another thought gradually takes over. It is this: Boal and Bigelow have tried hard to give us the truth. This is not a sugar-coated, super-hero mock-up of what happened. This is what happened. Yes, the U.S. practiced some ugly stuff. Abu Ghraib and Guantanamo have been realities. And, yes, one of Obama’s first directives was to take a different strategy. The other thing that sat with me was that it was a woman who masterminded the location and motivated the ultimate capture and assassination of bin Laden.

Chastain is not glitzy and appears without make-up most of the time. She is not working for a date and there is no romance. She takes this film and makes it seem like you are a witness – as if you are viewing the real deal. She also makes you think. In Britain’s Daily Mail report, not only do her CIA colleagues say the portrayal is “spot-on,” but it is reported that after viewing bin Laden’s body and leaving for home, she curls up into a fetal position and cries.

This is a film for all Americans to witness and experience. How we can make it part of the Oscar season and judge it as better or worse than the other contenders almost makes a mock of the seriousness and importance of this exceptional film.