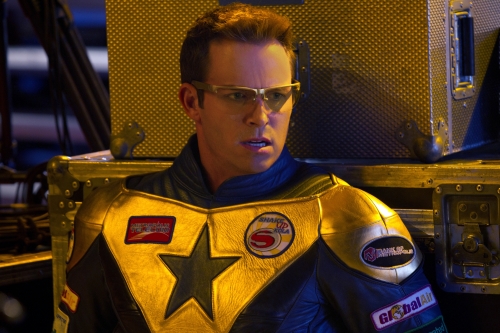 There are three episodes left until the two-hour series finale of “Smallville” and tomorrow night, two more DC characters, Booster Gold and Blue Beetle, come to Metropolis. The episode, “Booster,” is written by DC Comics writer Geoff Johns. But this is not just the episode where Clark meets these heroes – this episode will also introduce the classic bumbling and more nerdy Clark Kent after all these years — which you will see glimpses of in this preview.

Here is the official description for the episode:

DC COMICS CHARACTER BOOSTER GOLD ARRIVES FROM the FUTURE; The BLUE BEETLE IS BORN! — After everything that happened with the VRA, Lois (Erica Durance) tells Clark (Tom Welling) it’s best to make “Clark Kent” forgettable and awkward so people don’t suspect he’s The Blur. However, the two are stunned when a fame-hungry superhero from the future, Booster Gold (guest star Eric Martsolf, “Days of Our Lives”), sweeps into town and begins making saves and posing for press ops, completely winning over the city of Metropolis. Booster begins his campaign to take The Blur’s place as the “World’s Greatest Superhero” and tries to charm Lois into writing a story about him, but she’s not having his antics and begins her own campaign for The Blur. During one of Booster’s saves, an alien weapon in the form of a scarab falls from a truck and fuses itself to a boy named Jaime Reyes (guest star Jaren Brandt Bartlett), turning him into the Blue Beetle. Unfortunately, Jaime is unable to control the suit and Blue Beetle starts attacking Metropolis. Tom Welling directed the episode written by Geoff Johns (#3X6019).

Ever since Johns’ first episode — Season 8’s “Legion” — I have been looking forward to his episode. Last year, we had the two-hour episode “Absolute Justice” featuring the Justice Society of America — and it was one of the best things about Season 9. From the looks of the trailers, the images and the interviews from Martsolf and the producers; this looks like it could be one of the best episodes of this season. A mild-mannered Clark Kent, Blue Beetle and Booster Gold — what more can you ask for?

One thing I have been especially looking forward to with this episode was the Blue Beetle costume. Last summer, DC Comics released footage of a possible Blue Beetle series and this is basically what he looked like and what I was hoping that he would look like on “Smallville”:

Since the alien scarab will take over Jamie, maybe we’ll see something similar later in the episode.

So, what do you think of the entrance of Booster Gold, Blue Beetle and a mild-mannered Clark Kent? Let us know by leaving your comments to the right.