Sonic The Hedgehog redesign is official

The fan base of Sonic the Hedgehog is notoriously loyal, to the point of fanaticism. Each new game is awaited anxiously when announced, debated passionately upon arriving, and likewise defended ferociously from outside criticism.

So, when an official Sonic the Hedgehog live action film was announced, that some controversy would arise was all but guaranteed. The extent of the controversy, however, was more than even the filmmakers anticipated. Or, was it perhaps exactly what they were hoping for?

The Blue Horror
Over the last few months, vague, shadowed images of the live-action Sonic were gradually eased out onto the Internet. But doubts were voiced with the very first image. It was an image that, although showing no clear image of Sonic, presented a silhouetted body that was anything but true to the source material. Instead of the cartoony, bulbous headed character everyone expected, there was a sleek bodied, hyper realistic redesign.

Then came the full reveal, and virtually the entire Internet looked up to gasp in unison. Even those who weren’t Sonic fans tore themselves away from their favourite online blackjack Canada games just to say, “Wow, that’s terrible.”

What Happened?
The idea of the design seemed to be, in all fairness, a creature that really did spend most of its time running. From the skinny legs and aerodynamic body, this was a Sonic based around the musculature of a marathon runner. Or at least, that’s what it seemed to be.

Either way, the response was resoundingly negative, to the point that virtually every YouTube channel, Instagram account, and blog page exploded with an appropriate rant.
Come to think of it, anything getting such a widespread social media reaction really is a true triumph in marketing. The free publicity must have been worth millions, if not tens of millions. It couldn’t have happened better if it had been planned.

After all, that virtually the entire world is now aware that a Sonic film exists has been achieved. Plus, the number of people who will head off to the cinema just to see if the new design is better, will surely likewise be enormous.

Did Anyone Notice Jim Carrey?
It was officially announced the film would be delayed, specifically so that a new Sonic design could be whipped up and inserted into the movie. If the controversy was or wasn’t purposefully generated or the design used as a myth in order to draw attention, and generate interest, is debatable. But if it was intentional, it can only be called a masterstroke of social media advertising.

Though, with all the fuss, was anyone actually paying attention to any other aspects of the film? It seems that Jim Carrey playing Doctor Robotnik, otherwise known as Eggman, was almost entirely overlooked. Not that it seemed like he was giving a mind-blowing performance or bringing his A game. But he sure was there.

The movie will be out in a few months – with dedicated fans holding their breaths in anticipation. Will a better, more true to his roots, Sonic will be seen? Or could the redesign be even worse than the original design? Only time will tell. 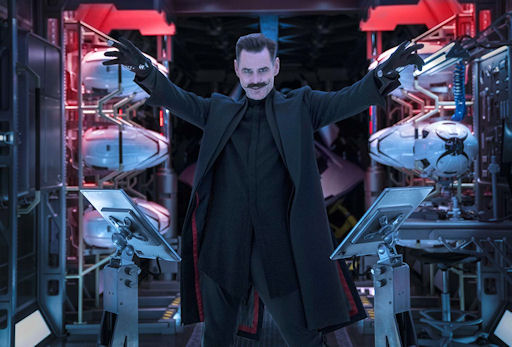