Stories We Tell Selected for Sundance

“Stories We Tell,” Sarah Polley’s National Film Board of Canada feature documentary, has been selected to screen at the Sundance Film Festival, taking place in Park City, Utah, from Jan. 17 to 27, 2013. Produced by Anita Lee for the NFB, “Stories We Tell” is the first documentary ever chosen for the festival’s Spotlight category. 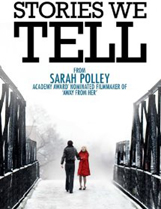 Acclaimed by critics and audiences during its Canadian theatrical run, “Stories We Tell” will open theatrically in American cities later in 2013, distributed in the U.S. by Roadside Attractions.

In “Stories We Tell,” Oscar-nominated writer/director Sarah Polley discovers the truth depends on who is telling it. Polley is both filmmaker and detective as she investigates the secrets kept by a family of storytellers. She playfully interviews and interrogates a cast of characters of varying reliability, eliciting refreshingly candid, yet mostly contradictory, answers to the same questions. As each relates their version of the family mythology, present-day recollections shift into nostalgia-tinged glimpses of their mother, who departed too soon, leaving a trail of unanswered questions. At its core is a deeply personal film about how our narratives shape and define us as individuals and families, all interconnecting to paint a profound, funny and poignant picture of the larger human story.

“Stories We Tell” was developed by Polley at the National Film Board of Canada’s Ontario Centre, produced by Anita Lee and executive produced by Silva Basmajian.