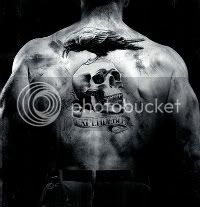 Let the “Expendables 2” goodies start coming in! As a fan of the first film, I am anxiously awaiting any news or info about the sequel project, and the last couple of days have been jammed packed with them.

While the big questions in the last few months have been about who’s coming back for the sequel, whether Jean-Claude Van Damme would play nice and who would direct it, light had yet to be shed light on what the plot would actually be about.

Lionsgate has shot our way a possible synopsis, that if you ask me, sounds like the perfect formula for an amazing action packed movie. The actual script is not 100 percent finished, but read the synopsis below at your own risk since (it is spoiler-filled):

The Expendables are back and this time it’s personal! After Tool (Mickey Rourke), the heart and soul of the Expendables, is brutally murdered on a mission, his comrades swear to avenge him. They’re not the only ones who want blood. Tool’s beautiful young and wild daughter Fiona embarks on her own revenge mission, complicating matters when she is captured and ransomed by a ruthless dictator plotting to destroy a resistance movement. Now Barney (Sylvester Stallone) and the Expendables must risk everything to save her and humanity.

Are you still breathing? Trust me, I know how you feel — I want this movie made immediately.

And now check the new poster made for the Cannes festival below. It is a play on the poster from the original movie but with a couple of changes. Some people say it is too simple; personally, I think it is perfect. That logo has become known world-wide, so there’s no need for more. The actual movie will already have more stars, more action, and it’s gearing up to blow our brains out.

So, what do you think?