The First Clip from ‘X-Men: First Class’ Has Arrived 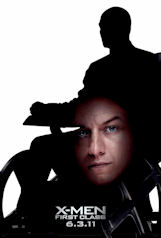 “X-Men: First Class” is picking-up the pace in the promotional department and seems to be going full-steam-ahead now. Following four character trailers released this week, we now have the very first official clip from the movie.

In this clip, we have Charles Xavier (James McAvoy) at the C.I.A. headquarters trying to explain human mutation to a group of government agents. You can see their cynicism when people possessing extraordinary powers are discussed. When Xavier uses his powers to lift Top Secret information from the mind of one of the government officials, he is accused of being a spy. Mystique’s (Jennifer Lawrence) quick action to transform into one of them quickly shuts the whole group up. The reaction of shock and disbelief on the faces of all in the room is pretty funny, especially from Dr. Moira MacTaggert (Rose Byrne).

We know from the trailers that she is destined to become one of the X-Men, so either at this point in the movie she hasn’t yet or is completely surprised they have shown their powers publicly. One little gem in this clip is the inclusion of the mysterious man in black played by Oliver Platt — who is a great comedic actor. Although this clip isn’t action-filled, it is illuminating to the state of affairs in relation to the government and their knowledge of the existence of mutants living among them.

I have become more confident in the film over the past few weeks, even though the rumors of rushed special effects and a very quick turnaround of filming to its release date can be off-putting. One of the major reasons I believe this film has yet to gain the followers and fan base that it should have is the confusion surrounding it.

Growing up, I was an avid comic-book collector and then as a teen I watched every single episode of the ’90s X-Men cartoon show. Now, as an adult, I have come to watch and admire the X-Men movie trilogy, but there are story aspects and characters involved in “X-Men: First Class” that I have either never heard of or they are being used in a different capacity than I remember them.

Fox Studios, along with Marvel, need to come out and officially declare this film has no correlation in story or characters to the movies that have come before it. It is its own entity and the story and the mutants in it have no connection to Bryan Singer’s “X-Men” movies. I think a relief in the tension I have in trying to make this film fit into the universe created before it is causing a lot of the doubts. If someone would publicly acknowledge these facts then maybe the fans wouldn’t be confused or as critical to the details that just can’t add up.

What do you think of this new clip? Do you agree that they are trying to use the fame of the past films to gain support for this new movie that truly isn’t associated with them? Leave a comment and let us know what you think?