The Mortal Instruments : Trailer No. 2 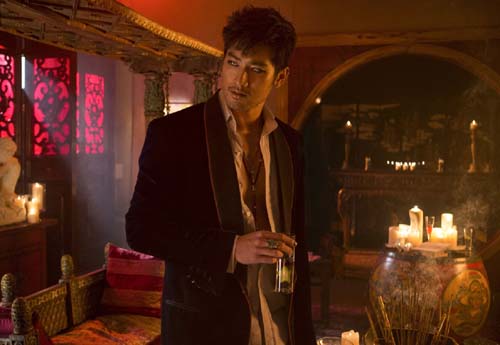 We have vampires. We have werewolves. And we even have zombies in abundance of late. Now, thanks to Cassandra Clare’s hidden world within our own, we have a small group of beings that call themselves Shadowhunters. In “Mortal Instruments: City of Bones,” the Shadowhunters (half human/half angel) hunt monsters from other dimensions hiding out in ours in a war of good vs. evil.

A night on the town for Clary Fray (Lily Collins) and her best friend Simon (Robert Sheehan) is normal until she sees a Shadowhunter kill someone in the middle of a dance floor – yet she’s the only one who seems to have seen it happen. This is only the beginning for Clary as it turns out the life she thinks she knows is not as ordinary as she thought.

Her mother, Jocelyn (Lena Headey), and her “Uncle” Luke (Aiden Turner) aren’t just your run of the mill caregivers either. Not only is Clary seeing things lately, but her mother is attacked in their home and disappears without a trace. Suddenly thrown into a world that she does not know, Clary has only Jace Wayland (Jaimie Campbell Bower), Isabelle Lightwood (Jemima West), Alec Lightwood (Kevin Zegers) and Hodge Starkweather, who are basically strangers, to help her find her mother and discover a past that was hidden from her that she has yet to discover.

This second trailer is more detailed than the teaser trailer, which was released in November 2012. Lena Headey has more of a presence as does Jaimie Campbell Bower, which helps in revealing a bit of the story line.

At the start of the trailer, Clary is a regular teen who is unable to accept everything that transpires, but transforms into a more confident young woman in the progression of the trailer.

The visual effects in the trailer give me some hope for the rest of the film, but I’m a bit hesitant about the fact that it seems as though Sony has given away a lot of the key scenes from the story itself. I truly hope that this is not the case and that the director has left enough of the movie as a surprise for the viewers. But the trailer promises some action, a supernatural love story, as well as a mystery that needs to be solved, and the only ones who can solve it are our young heroes: Clary, Jace, Isabelle and Alec.