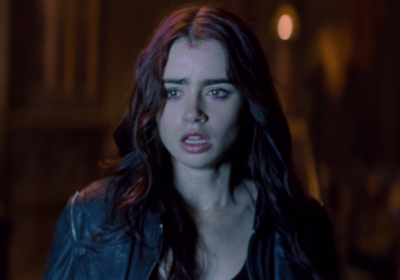 Based on the young adult novel of the same name by Cassandra Clare, “The Mortal Instruments: City of Bones” takes young Clary Fray (Lily Collins) on an adventure of self-discovery as she is introduced to a world that one has only heard of in fairy tales or perhaps even horror stories. It turns out that she holds the key to the survival of the human race and other worlds unknown to normal human beings.

The trailer starts us off with Clary seeing things that others cannot and she learns that she is a Shadow Hunter just like her mother (Lena Headey), a being who is half angel and half human destined to restore order to the world with immense powers to break down barriers that she and only others like her can see.

The tale seems to be a little dark for a young adult series, but don’t disregard the imagination of a teenager. This film looks like it will be action packed as well as delving into the realm of the supernatural and once again exploring the idea of a female protagonist as the heroine. Will it satisfy your thirst for the extraordinary? We shall have to wait and see.

The film was directed by Harald Zwart and the screenplay adapted by Jessica Postigo and I. Marlene King. Lily Collins is joined by Jamie Campbell Bower, Jonathan Rhys Meyers and Jared Harris.

If you are unfamiliar with “The Mortal Instruments” series, check the books out to tide you over until the film’s release on Aug. 23, 2013, by clicking the Amazon link below.