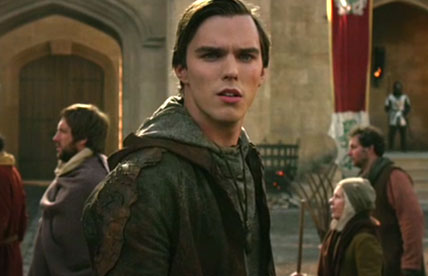 New Line Cinemas has revealed the new trailer for Bryan Singer’s “Jack the Giant Slayer.” The film (previously known as “Jack the Giant Killer”) had been moved from its June 15, 2012, release date to March 1, 2013, and is now taking over the date for “Elysium.”

Playing Jack is Nicholas Hoult, best known for his roles in “About a Boy” and in “X-Men: First Class” as Hank McCoy (aka Beast). Jack volunteers to go rescue Princess Isabel, played by Eleanor Tomlinson, who has been taken by a race of giants long forgotten by time and the human race, with the Elmont (Ewan McGregor), leader of the King’s elite guard.

In this new trailer, we meet the two-headed leader of the giants, voiced by Bill Nighy and John Kassir, along with Stanley Tucci as Lord Roderick, who has aspirations of usurping power from Isabel’s father King Brahmwell, played by Ian McShane.

The trailer is quite elaborate and the world of giants is shown quite a bit, but I feel it reveals too much of the plot already. It is visually appealing with promises of many battle scenes, but I look forward to seeing Stanley Tucci as Lord Roderick. The tiny snippet we see of him hints at a bit of comedic relief.

“Jack the Giant Slayer” tells the story of an ancient war that is reignited when a young farmhand unwittingly opens a gateway between our world and a fearsome race of giants. Unleashed on the Earth for the first time in centuries, the giants strive to reclaim the land they once lost, forcing the young man, Jack, into the battle of his life to stop them. Fighting for a kingdom, its people, and the love of a brave princess, he comes face to face with the unstoppable warriors he thought only existed in legend—and gets the chance to become a legend himself.

What are your thoughts on the newest trailer for “Jack the Giant Slayer”?