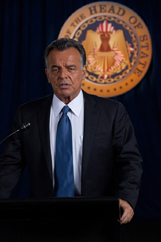 Fans of Ayn Rand’s seminal 1957 novel will be happy to hear that even though 2011’s “Atlas Shrugged: Part 1” underperformed at the box office, the studio and producers behind the movie have gone ahead with the second film of the proposed trilogy and after a single teaser trailer, we finally have the full trailer here for you.

Here is the synopsis of “Atlas Shrugged: Part II.”

The global economy is on the brink of collapse. Unemployment has risen to 24%. Gas is now $42 per gallon. Brilliant creators, from artists to industrialists, continue to mysteriously disappear at the hands of the unknown.
Dagny Taggart, Vice President in Charge of Operations for Taggart Transcontinental, has discovered what may very well be the answer to a mounting energy crisis – found abandoned amongst the ruins of a once productive factory, a revolutionary motor that could seemingly power the World.
But, the motor is dead… there is no one left to decipher its secret… and, someone is watching.
It’s a race against the clock to find the inventor before the motor of the World is stopped for good.
Who is John Galt?”

There are a few key elements that jump out at me after watching this trailer, the first being that nearly every main character seen in the first film has been recast. While looking for an explanation as to why, the best reason I found was due to scheduling conflicts. Not all of the cast members could return to film the movie at the same time, so they decided to recast them all. This makes sense and seems to be a good move on the studio’s part, though it could be slightly jarring for viewers who watched and enjoyed the previous installment. I did like the actors and thought they all did a good job and while it is a shame they aren’t returning, I will choose to not to focus on that aspect of the movie.

The second aspect that stood out about this trailer was that the production value seems to higher than “Atlas Shrugged: Part 1.” With an ever-expanding world and larger set-pieces, the budget was raised from $20 million dollars to around $25 million dollars for this sequel and it shows.

The movie is full of the same ideas and principals found in Ayn Rand’s novel and the film is set for release next month — just in time for election season. Hopefully, some of the ideologies and concepts about us as Americans and standing up to our government when we believe something is wrong will strike a chord with many people who go see it. As a nation, we Americans need to see some change in our economy and hopefully we can prevent the events of this work of fiction to never come true in real life.

With all of these changes, producers Harmon Kaslow and John Aglialoro are sure doing their best to draw in audiences and get the attention of not only fans of Ayn Rand’s novel, but of the general public. I have even heard that part of the raised budget was going into publicity for the film, whereas the prior movie relied primarily of only word-of-mouth. Seeing as this sequel would never have been made by a major studio based of the box office success of the first film, you can see how dedicated and committed they are to seeing this story unfurl onscreen.

With such a complex set of ideas to bring to life on the big screen, the studio has some hard work ahead of it to do the book justice, and seeing as the majority of people who will be seeing it are already fans of the source material, they are also the most important critics and people that the studio want to impress most.

So are you a fan of the novel or the first film? Do you agree that political movies like “Atlas Shrugged: Part II” are important during election season? Leave a comment and let us know what you think.