Trailer: Now You See Me 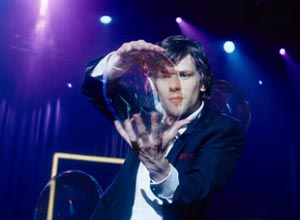 In “Now You See Me,” Henley (Isla Fisher), Merrit Osbourne (Woody Harrelson), Michael Atlas (Jesse Eisenberg) and Jack (Dave Franco) are “The Four Horsemen,” a group of the world’s greatest illusionists who give a new meaning to stealing from the rich to give to the poor.

In this first official trailer, we see the master magicians performing their illusion — where they openly announce that the volunteer will be robbing a bank. Through various scenes, we see the audience remember stepping onto a platform and later is standing inside a bank vault. Later, the Vegas audience is being showered with bills from the bank heist, all the while unaware that an actual bank half way around the world had been robbed.

However, the FBI is on to them, but do not know exactly how all of it is possible. Dylan Hobbs, played by Mark Ruffalo, is the man on the case, with the help of Arthur Tressler (Michael Caine) and Thaddeus Bradley (Morgan Freeman), as they try to expose the group of magicians. The task, it seems, is proving to be difficult for agent Hobbs.

The trailer leaves me wanting to know more about the plot of the story. From this short trailer, it is clear that it is a departure for Eisenberg compared to his previous roles to date. This film is more action packed and gives him more of an edge.

How are the illusionists pulling off these heists? Is it truly magic? Is it a pre-planned bank heist and the illusionists are always one step ahead of the FBI? I, for one, am very interested to find out how the “magic” heists are pulled off.

“Now You See Me” pits a crack FBI squad in a game of cat and mouse against a super-team of the world’s greatest illusionists, who pull off a series of daring bank heists during their performances, showering the profits on their audiences while staying one step ahead of the law.

“Now You See Me” is directed by Louis Leterrier and written by Ed Solomon, Josh Applebaum, Andre Némec, Edward Ricourt and Boaz Yakin. It is scheduled to hit theaters June 7, 2013.