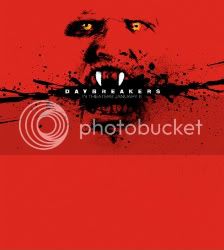 “Daybreakers” is the upcoming film by directors Peter and Michael Spierig. This is another film that looks to have potential, but is being released in Hollywood’s early-January dumping ground.

Worse, this film has been completed since September 2007, meaning it has sat on the shelf nearly two and a half years — not a good sign.

Still, I’m a sucker for well-done vampire flicks (cheesy pun unintentional, but I’m leaving it in anyway) and I hold out hope this will be the next great entry into the genre.

The story revolves around a world where almost everyone is a vampire; the world has become so overpopulated with bloodsuckers, in fact, that there’s not enough blood to feed everyone.

In answer, someone invents a cure for vampirism with the intention of using the newly cured as a food source.

Intriguing idea, with lots of potential for social commentary, but who knows if the film will live up to its potential. I guess come January, we’ll find out.