Before I start with my review, I would like to point out that the reason why my review isn’t out until now is because it was just released here in Sweden (almost a month after the U.S release). 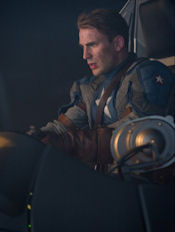 “Captain America: The First Avenger” is the best of the three Marvel movies that came this year – it had something that I felt “Thor” and “X-Men First Class” did OK with, but not as well as “Captain America,” getting deep into the title character. On the outside, Steve Rogers (played by Chris Evans) is a little man, but inside he is a man with a big and brave heart.

He seeks a chance to fight for his country, and he doesn’t let his physicality stop him from getting this opportunity. “Whatever happens, stay who you are. Not just a soldier, but a good man.” Those were the words of Dr. Abraham Erskine (Stanley Tucci) and in the end, Rogers really responded to those words by being exactly as the doctor has described him – a good man. With the chance he had been given to serve his country, it never went over his head – he did get an incredible body, but his heart never changed. That was precisely how I wanted to see Captain America — as a true and honest hero, rather than just a superhero. In some other media, the Captain has been shown more as an superhero than as the type of hero I just described, which has bothered me. But thanks to Evans’ portrayal, I saw Captain America presented in the way that I have always seen him.

In addition, I must really give credit to how well they did the skinny version of Rogers. It didn’t look unbelievable and even after Rogers’ transformation, I still saw that little man throughout the story – even with those big, sexy muscles of his (I’m still waiting for someone to find out Evans’ workout routine).

Something else that contributed to make this movie as good as it was was the cast. I can’t imagine any other actor taking up the role as Steve Rogers/Captain America. Chris Evans owns this character to the roots. He did a touching portrayal of an amazing character by really going deeper into Rogers. I don’t think I have felt this way since I saw Christopher Reeve as Superman. With Hugo Weaving as the villainous Johann Schmidt (aka the Red Skull), I was really pleased and intimidated (in a good way, of course). Weaving convinced me he was a man who was truly right for this character and also he did well on the German accent. I do hope to see him again in coming sequels of “Captain America” because I want to see more of these two against each other. I also give thumbs up to the make-up and costume designers for making the Red Skull look convincing.

The supporting cast — including Hayley Atwell as Peggy Carter, Sebastian Stan as Bucky Barnes and Dominic Cooper as Howard Stark — was filled with good choices for this movie. I don’t think I was disappointed by any of the actors of their characters. But the two with whom I was most pleased were Stan and Atwell. Their characters were really strong and inspiring and their performances — as with Evans and Weaving – were convincing and fantastic.

Along with a strong cast, the film had an outstanding storyline. It felt fresh and the writers, Christopher Marcus and Stephen McFeely, did as the writers for the “Iron Man” franchise and “Thor” have done – bring these characters alive and give them suitable stories. I would be foolish to forget to congratulate director Joe Johnston, who did an fantastic job bringing the Captain back to the big screen successfully. I hope to see him back in the director’s chair for upcoming sequels. The movie wasn’t rushed and proceeded in a perfect tempo.

Plus, I was speechless throughout every action scene that was in the movie – the stunts and the technique were the best that I have seen this year and seeing that shield in action makes me wish that I could own one myself. The special effects also made the action sequences marvelous.