Under Review: ‘Clear Cut: The Story of Philomath, Oregon’ 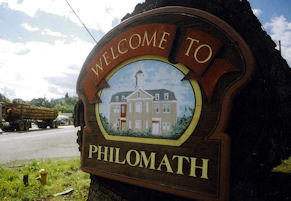 Since 1958, all the graduating seniors at Philomath High School who were going on to college were given college scholarships. Rex Clemens, a local timber baron, established this foundation to support the high school and its students. But then it became political.

What happens when the relatives now running the Clemens Foundation don’t like the school superintendent, disagree with school policies and want the science curriculum changed? By the way, we’re not talking about evolution vs. divine creation, sex ed or abortion rights. We’re talking about ecology. Right there in Philomath, Oregon.

There is more to the story than might be expected. Philomath is a little town (pop. 4,000) that has suffered from the edicts of two federal judges that favored safeguarding the habitat of the spotted owl over supporting local timber harvesting policies. This federal protection effectively castrated Philomath, Oregon, as a world leader in the timber industry. It used to have 12 saw mills. Now it has one or two.

Most residents used to have at least one connection to the timber business, which was the major employer in town. Now Oregon State University and Hewlett Packard are the big employers in the area.

However, of all the possible curriculum areas in Philomath High School, ecology ended up the topic of contention. With the decline of the construction industry in the last 10 years coming on top of increasingly restrictive Federal environmental regulations for logging, Philomath and the Oregon timber industry have suffered at the very hands they interpret fashioned the ecology movement.

So it didn’t help that the school superintendent (from Chicago) would say that the “timber industry is no different than the tobacco industry – for 50 years they have been lying.” He further shot himself in the foot when he explained that the timber industry only cared about profit, not the health and welfare of the community.

On the other side is the spokesman for the Clemens Foundation and longtime resident, Rex Clemens’ nephew, Steve Lowther. He represents the old-time timber community that believes the land and its trees are best taken care of by local business. Who better to take care of this resource than a consortium dependent on the long-term health of the forest for its own success and prosperity?

This is a classic conservative vs. liberal conflict.

Peter Richardson, the director of “Dying in Oregon,” wields his magic as a director who is known for getting his subjects to open up in frank honesty. That’s the riveting spell about “Clear Cut.” The avowed Christ-inspired timberman slips in comparisons of the newer town inhabitants to Nazis and calls those who disagree with him a vulgar term.

Counter that with Richardson’s interview of the superintendent who essentially calls the whole Clemens family liars and you’ve got a conflagration of righteous indignation consuming this once innocent little town.

So one day when the high school Gay Straight Alliance held its annual Day of Silence (like just about every other high school in the nation) to bring attention to anti-LGBT (lesbian, gay, bisexual and transgender) name-calling, bullying and harassment, Steve Lowther seized the moment and mailed their announcement flyer with his own incendiary introduction to every household in Philomath.

Added to that, Mr. Lowther suggests that the paddle be brought back to schools as a punitive agent and that a school uniform be instituted. At a full school gymnasium the School Board held a meeting. Towards the end Lowther took the podium and called for a hearing on the Superintendent.

In all stories of oppression and competitions for domination, who are the ones who end being the dogs who are kicked? Who were the vulnerable that Rex Clemens was wanting to support?

The grandest irony of the entire situation is in the town’s name, Philomath, meaning love of learning. Is Rex Clemens rolling over in his grave or what?

“Clear Cut: The Story of Philomath, Oregon” is
showing at the Northwest Film Center
in Portland, coincidentally named the Greenest City in America
and about an hour’s drive from Philomath,
on Thursday, June 9, 7:00 pm.
Peter D. Richardson, filmmaker, will be in attendance.