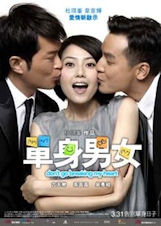 I’m writing from Hong Kong about a film produced here called “Don’t Go Breaking My Heart.” Set primarily in the downtown business district of HK, I’m analyzing it from a cultural perspective, trying to gain some insight about the seemingly very westernized Chinese Hong Kong culture.

First of all, of note is that this popular Asian film is delivered in the Mandarin language of China rather than the provincial Cantonese of prior HK films, a signal of the gradual but insistent assimilation of HK into the greater Chinese culture. However, more insightful to me, is this film’s strong message about character and values.

The seemingly light-hearted story starts out when our star, darling Gao Yuanyuan, boards a bus going to work. She gives up her seat to a pregnant woman. They appear to know each other. The pregnant woman becomes very upset and Gao becomes upset, too. Then a man appears and forces our star to leave because she is upsetting his pregnant wife.

We soon learn that darling Gao has been having an affair with this married man who is now dumping her, in front of his wife, and demanding that she get off the bus.

All the while, the most handsome man known in the history of the silver screen (I kid you not) is driving beside the bus in a snazzy sports car convertible noticing all that is occurring. He sees our star leave the bus and immediately begins his attempt to find a place to somehow park his car in the narrow, overpopulated HK business district so he can join her.

Gao becomes disoriented in her distress and heartbreak and almost gets run over as she tries to cross the street. Her work papers spill out and a traffic jam results. A disheveled street bum guzzling a bottle of booze befriends our lady and helps her gather up her belongings as well as her ego. They hang out, enjoy a shared bottle of wine and become friends.

In the meantime, Mr. Handsome finds a place for his car and starts looking for Gao but can’t find her.

This all happens in the opening moments of the movie. We meet the characters and see the situation. Though Gao, a Doris Day/Diane Keaton facsimile, has been involved in a tawdry affair, she is cute and unpretentious – an angel.

We infer that she became involved with Mr. Despicable when she didn’t know he was already married. After her time with the street guy she gives him all Married-Man’s things and returns to her office life.

However, when she looks out her high rise window she sees Mr. Handsome in the building across the way. He is taping flowers and happy faces on his window for her. He has been trying to get her attention for weeks and now we understand his earlier attempt to meet her.

Thus begins the 3-way farce that gets ever more complex with dashes of slapstick and exaggerated emotions. The plot develops significance when Gao learns that Mr. Handsome, though professing to love her and even proposing marriage, cannot commit to monogamy. However, the bum, inspired by her, resumes his architectural career, embraces sobriety and promises fidelity.

Mr. Handsome ends up incredibly successful at his job and eventually becomes her boss as well. He buys her a Maserati and woos her with riches, power and his dazzling good looks.

Her choice, the focus of this film, lies between two men. One has integrity and one does not. Can she break her historical inclination to make a bad choice?

What does the audience learn about HK culture? It seems to be a coming of age story about women. Now that they are working and financially independent, they have choices. They can choose to be dominated by a man and his selfishness or they can discern true character and choose an egalitarian relationship based on respect.

Perhaps in the seething competitive HK metropolis, there is also this choice. Perhaps every day there is the choice to choose integrity and fidelity over capricious self-interest. Perhaps, for this prodigal progeny, that is the key for a stable, happy future for Hong Kong.