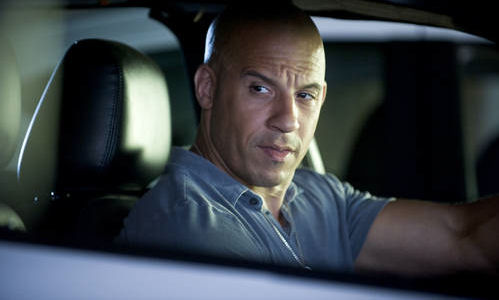 I’ve enjoyed every “Fast and the Furious” film. Yes, that even includes the poorly-reviewed “Tokyo Drift.” I don’t understand why that one gets so much hate. It was certainly better than “2 Fast 2 Furious,” which was directed by John Singleton. Which brings me to this point. Since Justin Lin took over the testosterone-amped franchise, the films have evolved into something more than just street racing fare and “Fast 5” is easily the best of them all. Full of action and absurdities, I enjoyed every single minute of it.

The film begins right where the fourth film left off and then quickly moves to a fantastic chase between a train and a sports car. Who’s behind the wheel of the speedster, you may ask? Dom (Vin Diesel), of course. Hanging from the locomotive for dear life is Brian (Paul Walker), who hurls himself from the speeding train onto the racing vehicle — escaping sudden death. Nevermind the fact the stunt could never feasibly happen. In fact, don’t try to rationalize it or any of the other extraordinary feats from that point forward. The laws of physics don’t apply to the “Fast 5” gang and that’s what makes the film so fun.

Set in Rio de Janeiro, the team assembles for what is supposed to be one last job (yeah, right). However, hot on their tail is federal agent Hobbs (Dwayne “The Rock” Johnson). Described as “Old Testament,” Hobbs is ruthless when it comes to apprehending criminals. The Rock, who was spritzed with water for every scene, is the perfect adversary to Vin D’s Dom. Looking like a goliath … no, scratch that … like a Terminator, Hobbs eventually faces off with Dom in a battle of muscle, giving the audience what we’ve been waiting for since the trailer hit.

But, I’m jumping ahead a bit. Also returning to the sequel or prequel since “Fast Five” takes place sequentially before “The Fast and the Furious: Tokyo Drift,” is Tyrese Gibson (Roman), Sung Kang (Han), Gal Gadot (Gisele), Matt Schulze (Vince), Ludacris (Tej) and Jordana Brewster (Mia). Musician-turned-actors Tego Calderon and Don round out the ensemble as Santos and Leo Omar. The crew back returns to action to orchestrate one heck of a heist, which consists of lifting $100 million from drug kingpin Reyes (Joaquim de Almeda). By no means is this an easy job, but Dom and his “Fast and Furious” family wouldn’t have it any other way.

“Fast Five” will easily jump-start a sluggish box office and bring in summer numbers this weekend domestically. Including last night’s midnight showings, the film has already earned $47 million globally. Come Monday, Justin Lin and crew will have much to celebrate and rightfully so. Hats off to Lin for reviving the franchise. He certainly is a master at this genre.

Not only that, Lin is a bit of a visionary. While other directors continue to cast Caucasian leads, Lin’s leads are multi-ethic. The director understands today’s growing and changing audience.

Will there be a “Fast Six”? From the boisterous reaction that followed an additional scene after the credits, there better be. But I won’t spoil the ending for you. You’ll have to watch “Fast Five” for yourself.

“Fast Five” opens today in theaters. Make sure to see it opening weekend with a lively crowd.