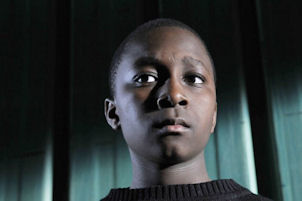 In a time of increasing economic fears, the words of the hero in “Le Havre” are a sad commentary about his position as a shoeshine man: “There are better professions, but besides shepherds, it’s closest to the people and the last to respect The Sermon on the Mount.”

It was that last reference that hooked me into re-examining the immigration issue that is the focus of producer-director-writer Aki Kaurismäki’s simply told story about a complex subject set in Le Havre, a French seaport.

The film opens with the murder of the man that Marcel Marx, the shoeshiner and hero, has just serviced. He exclaims after a distant scuffle and shots that it was lucky the guy paid him before the mishap. So we are thinking that Marx, superbly played by charming André Wilms, is just looking out for his own survival and is a bit heartless.

The next scene has a policeman banging on cargo crates. We wonder why until we hear a baby cry. The police are called, a team to combat possible terrorists is deployed, medical gurneys are laid out and newspaper photographers are ready. The crate from Africa en route to London had been delayed three weeks and everyone fears what state the survivors may be in. When the shipment container is opened a young boy dashes out while the others are taken to a detention center for eventual deportation.

The boy’s goal is to reunite with his mother who works illegally in a Chinese Laundry in London. But now he is in Le Havre and, by coincidence, ends up being cared for by Marcel Marx.

A little research about this film yields the information that Marcel was named for Karl Marx. Reading into this the viewer is encouraged to note the class struggle on a few levels in the film and Marcel’s rebellious but righteous role.

Detective Monet was reportedly based on Dostoevsky’s detective, independent-minded Porfiry, in “Crime and Punishment.” Det. Monet, played by Jean-Pierre Darroussin with superb understated French cunning, searches not only for the illegal immigrant but also his conscience for what his position and action should be on this case. We can’t help but also regard a play on his artistic namesake, alluding to a perspective on reality that isn’t crisp and clear.

All these allusions, including the Beatitude reference, cause the viewer to reflect.

What is the world’s moral obligation to those who choose to immigrate? Are there specific immigration requests that are more legitimate than others? Is there justification for increased immigration leniency? What contributes to conditions so bad in a home country that its citizens are willing to risk dehumanizing deprivation and mortal risk to immigrate? Where do our global responsibilities begin and end?

In addition, why did the International Federation of Film Critics choose this film for its 2011 Prize? Founded in 1930, FIPRESCI promotes films with “artistic expression and cultural education.” Is there a political agenda about immigration that the foreign press feels compelled to reinforce?

The issue of global inequality in all sectors of human existence is overwhelming. But as individuals, what is our personal response and obligation? What does poverty-stricken Marcel Marx do when the young boy wishing reunification with his mother appears at his house?

The police are looking for the boy and aiding an illegal refugee is against the law. What is the right interpretation and response to the Sermon on the Mount?

There are many questions implicit in this lovely, well organized, gentle film. The Guardian calls it “a treat,” Roger Ebert calls it “tender and hopeful,” and Andrew O’Hehir has written that it’s “Exquisite! One of the most enjoyable pictures of the year.” The bottom line is that this film is worthy of your time and thought. 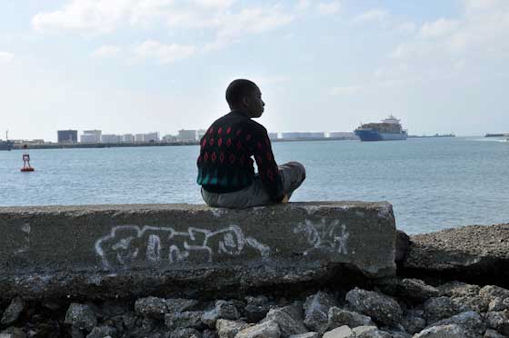 a film by Aki Kaurismäki