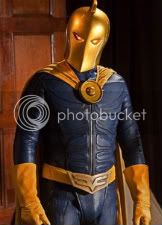 I remember being 6 years old and visiting a friend with my mom. I was sitting in their living room, and a movie they were watching before we arrived was playing on the TV set. What I saw next changed my life forever.

On the TV appeared a man, wearing a business suit and glasses and working in an office building, who begins to hear a high pitched sound that no one around him seems to notice. He then hears a voice speaking to him. What this man’s voice says apparently raises the concern of the man in suit. He quietly walks away from the room he is in and heads for the nearest window. He sits on the window sill, looks behind him to verify he has not been spotted, removes his glasses, and then leaps. As he majestically glides down the precipice, his business suit is magically replaced by another — a red and blue outfit that included a cape.

Now, after 20 or 30 stories of falling, little Josue (me) saw something remarkable; the falling man stopped falling. Instead, he began to turn around and soar up higher then where he was when he leaped. Yes, this guy, whoever he was, could fly, and that was the greatest thing I had ever seen until that day. Most of you have probably guessed the movie was “Superman: The Movie.”

Yes, I became obsessed. I got the comics. I saw both Christopher Reeves “Superman” movies, which were available at that time on VHS. Oh, and yes, I was that kid that you heard about on the news that tied himself to a rope and jumped!

I saw the rest of the films at the theater and watched the “Superboy” TV show. Later, in the ’90s, I never missed an episode of “Lois and Clark: The New Adventure Of Superman.” There was a long pause after that; live action Superman was nonexistent. I moved on with my life and always stayed loyal to “the Man of Steel.”

Then, in the early months of 2001, I was going through one of the worst times of my life, a lonely time in my life, when something saved me, and made this curse I had brought upon myself lighten. I discovered that they were going to release a weekly TV show that would concentrate on the early years of Clark Kent (the future Superman). This was a blessing for me! It gave me something to look forward to every week, and something to keep me occupied in between. Yes, the TV show was “Smallville” and, as you can see, it has a special place in my heart.

“Smallville” has always been about the journey of Clark Kent, alien name Kal-El, to become the one who we all know as “Superman.” From the beginning, the mild mannered Clark Kent of “this” universe was always brave and faced challenges head on. He was usually alone at the time of facing danger, but did he did so eloquently and with his usual heroic posture. I was a fan from the get-go.

Although, at times, I felt his progression was radically halted for reasons that were only moderately explained, the journey has so far landed here, in its ninth season. From the first episode of season nine, “Savior,” we have practically been enjoying a “Superman” show. His abilities are all well developed, and his training mostly complete. He has become the protector — “the invisible” protector — of Metropolis. During his journey, he has met and discovered great friends. Some with wonderful talents and other with actual powers. At times, they have been forced to worked together, but usually they fall apart at day’s end due to their pride, and personal issues. Currently, he has been sharing the task of protecting the world and Metropolis with other heroes like The Green Arrow, Aquaman, Cyborg, Impulse and Black Canary. Although they are most of the members of what one day will be called “The Justice League,” up to now, they have been far from being a team, or working as a team.

This is where the highly anticipated Smallville movie titled “Absolute Justice” comes into play. The plot is simple, Clark Kent and his friend Chloe’s investigation of a murder leads them to uncover a hidden group of superheroes that call themselves the J.S.A. and who appear to have fallen apart for very suspicious reasons.

It was very exciting hearing the news and watching the trailers for the movie beforehand. Much of the story was successfully kept pretty quiet. But, finally, came Feb. 5, and all the fans were treated to an absolutely spectacular event. We were able to witness, first hand, how Clark and friends came to realize the importance of team work. How they should trust an rely on one another, and perhaps develop a closer, more extracurricular relationship.

This all came to be when they met the members of a disbanded group called the Justice Society of America (the J.S.A.). With them in the “Smallville” universe, Geoff Johns — the movie’s writer and a veteran comic book writer — was able to bleed out an abundance of comic book lore that spans all of the DC comics historical periods. Some of the J.S.A. members that we meet in “Absolute Justice” are: Hawkman, Dr. Fate, Sandman, Stargirl and The Star Spangled kid. We also got glimpses of many others, including Green Lantern, The Flash, Wildcat and Atom. The costumes bared the attention to detail that is seldom noted when transferring comic books into live action

Hawkman, played by Michael Shanks is the beaten leader of the J.S.A. He is weary, unshaven and carries a load that we don’t discover until almost the end. When his pain is taken into consideration, then all his actions are understandable. He is brave and confident, and encourages Clark to trust his friends and learn to work well with them. It is a lesson that Clark learns apparently (more later).

The next fantastic character that they introduced was Stargirl, interpreted by Britt Irvin. She was the youngest member of the J.S.A. She is the apprentice of “The Star Spangled Kid,” and is forced to grow up quickly when her mentor is killed. She manages to blossom in the two-hour movie from a very sad, teary-eyed girl at the hospital, to a superhero fighting side by side in the end with Hawkman and the future Superman. Her character was a unique and pleasant surprise.

The Sandman and the The Star Spangled Kid have very small roles in the film and it is sad that we only get to meet them at the end of their journeys. Their costumes are also equally like they are in the comic books, but we never really get to see them in action.

The last J.S.A. member I would like to mention was also my favorite: Dr. Fate. Here we have a powerful being capable of seeing the future, with a presence demanding of your attention. He walks slowly and confidently, exuding power yet still appearing kind. His interactions with Lois and Clark were mesmerizing. Since he is the teller of fates, he knew everything we know. He knew who Clark will become, and who will help him get there. He was saying out loud in the movie, all the things we the fans have been screaming at our TV screens for almost a decade.

The next character I would like to discuss from the movie was my least favorite: Icicle, the movie’s villain. Everything about this villain came a little short for me. I don’t believe he successfully sold his role. Although his character brought these great heroes together to work as a team, I don’t feel he was as powerful as he was portrayed. Did it really take future Superman, Martian Manhunter and Hawkman, to stop this guy? I believe Clark alone would have taken him out had this been under different circumstances. Yet, as a fan, I am grateful to him for bringing them all together.

Pam Grier’s character, Amanda Waller (whom we will see more of on the show throughout the season) brings us another part of the DC lore — Checkmate. She appears to be the head of this underground organization called Checkmate, with the chess piece of a knight for their organization logo being thrown all around. She appears to be playing a large role in everything that is going on in this movie, from Lois to Tess Mercer. She is also the instigator behind all the killings “Icicle” is committing.

Martian Manhunter, who has been powerless for more than a season now, also returns to aid the investigation, and thankfully, his exchange with Dr. Fate ends well for him; he finally recovers his powers. Though brief, we also get a glimpse of his true “green” appearance at one point in the movie.

Lois Lane is the second to last character I would like to discuss. Although she does not appear in the movie until the second half, she immediately shines. She is is Clark’s destiny and it shows. With all of Chloe’s advance search engines and Clark’s investigation, Lois still cracks the mystery that Chloe and Clark had been trying to uncover all of the first half of the movie. She even exceeds their findings with new information that helps the team. She is truly an investigative reporter and an asset to Clark and the show. I cannot wait for her to finally be the No. 1 leading lady of this show.

The direction of the movie is something to discuss as well, since it had two directors: Glen Winters and Tom Welling, himself. Tom had already demonstrated his directing abilities on the show four times before. He is a natural behind the camera and his peers hailed him as one of their favorites. It is no surprise I felt the half that he directed flowed better. It had the substance that I enjoy about “Smallville.” In Glen Winters’ defense, his hour was more of a setup for the next, and he was missing some the other favorite “Smallville” characters, like Lois and Tess.

Louis Febre, the genius behind the music of “Smallville,” once again provided us with a soundtrack concerto. He truly knows how to embrace and give birth to the the heroic sounds and music that are required to make these characters and stories come to life.

Finally, I will talk about Welling. Although his Clark Kent/The Blur role in this movie was limited, mostly because he had to share so much screen time with other guests both new and old, he still managed to be center of everything the movie revolved around. He was the one who must take all the big steps, he must open his mind to working as a team, even if he doesn’t need them, or feels that they are getting into danger — he has to learn to trust them. His eternal fate was discussed, his future relationship with Lois, too. He played his role well and when it came down to it in the end, he fought heroically and the “team” saved the day. So, although I would have preferred more Clark, I understood his responsibilities on and behind the screen.

“Smallville: Absolute Justice” was more than any fan could have expected or is used to. It had all the aspects covered, it provided treats for the regular “Smallville” fans, as well as the comic book fan just tuning in out of curiosity. Ratings-wise, this was the highest-rated “Smallville” episode of the season in total viewers. Competitively, “Smallville” ranked No. 1 from 8 to 10 p.m. in men ages 18 to 49. This is a huge milestone for the show and my applause goes to a job well done. Many, many people worked hard to make this special event happen, and for a show that is in its ninth year, this was a fresh, and amazing achievement.

Look for “Smallville: Absolute Justice” to repeat on the CW during the summer and to appear on “Smallville’s” season nine DVD/blu-ray.