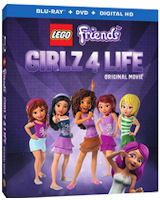 (Worth noting: Warner Bros. Home Video provided me with some of the materials I used in this Blog Post/Giveaway, but the opinions I share are my own.)

“LEGO Friends: Girlz 4 Life” is set to arrive on Blu-ray and DVD on Feb. 2 and our friends at Warner Bros. Home Video and the TetherGroup have given us a copy of the combo pack pictured here to give to a reader to celebrate the occasion.

Among the many things I love in life are giving things away to our readers and pretty much anything related to LEGO. The first one is self explanatory (we always strive to make this site better for our readers — we wouldn’t be doing this without our love for movies and for sharing that love with our readers). As for LEGO, those who know me best know how much I am addicted to LEGO video games and the LEGO movies and TV shows. When many were mocking the idea of a movie based on LEGO (which later became the highly-acclaimed “The LEGO Movie”), I knew how great everyone associated with the LEGO brand was at building humor and fun around the colorful little bricks.

There are few things as important in life as your friends. No matter how old you are, your friends are there to help you when you’re down, support you when you make mistakes, and be your rock when the going gets tough.

The new movie “LEGO Friends: Girlz 4 Life” is all about friendship, trusting yourself and standing up for what’s right no matter what the cost. All set to an awesome rock soundtrack you’re going to love.

Join Olivia, Stephanie, Emma, Mia and Andrea, as they learn about friendship, fame and pop star fun in Heartlake City. The girls’ friendships are tested when mega pop star Livi comes to Heartlake City. When our friends’ hit song “Girlz” is stolen by Livi’s manager, it’s time for a cunning plan. As the girls try to tell Livi the truth about her latest hit single, they all learn that fame isn’t everything and sometimes friendship is the most precious thing in the world.

“LEGO Friends: Girlz 4 Life” brings to life (in animated form) the LEGO construction based toy LEGO Friends, which invites girls into Heartlake city, and inspires them to use their imagination to build and role play their own stories with fun-loving relatable characters.

We are giving away a “LEGO Friends: Girlz 4 Life” Blu-ray, DVD and Digital HD Combo Pack to one lucky reader in the United States, with the contest scheduled to end on Feb. 1.

To win, start out by grabbing your pop star microphone because it’s sing-along night. Click the play button to watch the special sing-along music video for Girlz by L2M. Listen to the song “High Tops” and click to watch the “Meet L2M” video that introduces the next girl-pop power sensation. Download the “Girlz 4 Life” Activity Pack to unlock your inner pop star. The kit includes selfie props, a “Spot the Difference” game, making the Band DIY pop star instruments, a friendship card and more.

After you have done that, the question you might be asking is, “How do I win the combo pack?” Well, there are several different ways to win and you can read about them below:
• “Lego Friends: Girlz 4 Life” is all about the value of friendship and girl power. Leave a comment to the right saying what friendship means to you and why girl power is important in 2016.
• Watch the special sing-along music video for Girlz by L2M and leave a comment on the right with your favorite line or part of the video.
• Parents can download the “Girlz 4 Life” Activity Pack and leave a comment on the right noting which activity they enjoyed doing the most with their daughter or daughters.
• Or, you can get social with it on Twitter by using the hashtag #Girlz4Life and mentioning @ItsJustMovies on Twitter.

Giveaway Guidelines
Only one entrant per mailing address per giveaway. If you have won “LEGO Friends: Girlz 4 Life” on another site, you will not be eligible to win it again. Winner is subject to eligibility verification. United States households only.
The prize will be sent via FedEx or USPS. No P.O. Boxes please.