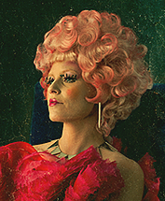 As a follow up to the teaser posters of recent Academy Award winner for Best Actress Jennifer Lawrence as Katniss Everdeen and Josh Hutcherson’s Peeta Mellark last week, Lionsgate is flooding social media outlets and the “Catching Fire” online community with new Capitol Couture posters. To start off, fans have been given a special treat with Elizabeth Banks in a high fashion portrait shoot as Effie Trinket.

Fashion in the Capitol is outrageous to say the least, and reading the descriptions of each character is completely different when a designer makes it a reality. Effie has her head held high and proudly because BOTH of her charges — Katniss Everdeen and Peeta Mellark of District 12 — won the 74th Hunger Games. Garbed in shades of orange and pink, Effie bursts in colors reminiscent of Katniss Everdeen “The Girl on Fire.”

I was skeptical of the wacky wardrobes before the first installment of “The Hunger Games” trilogy, but Elizabeth Banks sold her character like nobody’s business. Looking back on all of her previous work, I can see the eclectic array of roles that she has portrayed and I really believed her take of Effie Trinket.

After looking at this photo, it is something that one can find in the latest issue of Vogue or Harpers Bazaar on any given day, and I think that there’s no way in the world that a person would seriously wear the get up out in public. That’s the beauty of this photo (and I’m guessing in the other photos to come). Not everyone would do it and in the world that Suzanne Collins has created, only those in the Capitol would because that is the culture found there. Even the other districts in Panem laugh at the Capitol style.

What do you think of Effie Trinket’s couture wardrobe?