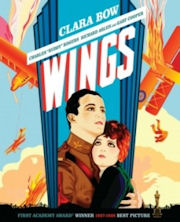 The very first motion picture to win an Academy Award, the silent film “Wings,” will return to screens for a rare presentation May 16. Presented by Paramount Pictures, “Wings” was meticulously restored to give fans the chance to view the visually stunning epic in pristine condition.

“Cinemark is thrilled to present this silent film masterpiece as our next Reel Classics offering,” states James Meredith, vice president of marketing for Cinemark Theatres. “This is a once-in-a-lifetime opportunity to see Hollywood history on screen, with incredible visuals and the original score recorded by a full orchestra.”

“Wings” is a 1927 World War I drama that explores the devastating effects of war through the story of two men who go off to battle and the woman they both leave behind. This historic piece of cinema stars Clara Bow, Charles “Buddy” Rogers and Richard Arlen, and also features Gary Cooper in one of his first feature film roles. Directed by William A. Wellman from a story by John Monk Saunders, screenplay by Hope Loing and Louis D. Lighton. The film has been rated PG-13 by the MPAA.

At a time when few films cost as much as $1 million, “Wings’” budget soared to an extraordinary $2 million. The investment paid off when the film opened and became a resounding hit, playing for over a year at its original New York engagement. In 1929, it became the first film to win Academy Awards® for Best Picture and Engineering Effects, now known as Special Effects.

Because of the extraordinary demands of the epic, the studio reached out to the U.S. Army for assistance and the picture was made with the cooperation of the largest garrison of troops in the U.S. at the time in San Antonio, Texas. Large-scale battlefields were built on more than five acres of land near the barracks and thousands of real-life soldiers appeared in the massive ground sequences. For the breathtaking aerial battles, groundbreaking new film techniques were used to capture a sense of authenticity that audiences of the day had never experienced before.

A full list of participating Cinemark locations, advance ticket purchases and show time information can be found at www.cinemark.com. Each location will offer two show times daily: 2 p.m. and 7 p.m.