Review: Out of the Clear Blue Sky 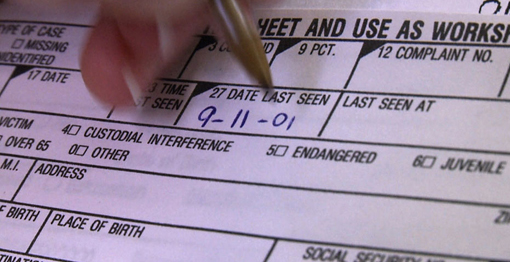 Note to the reader: This review is written by two IJM authors, exchanging decidedly different points of view. Although the format probably is different than you are used to, we hope you enjoy it.

Is this a sentimental documentary erring on the side of historical rewrite or a healing probe into the aftermath of the World Trade Center tragedy? Bearing in mind its focus is on what happened within one company in the aftermath of the fall of the Twin Towers, we debate over whether this doc gets it right.

The background is that Cantor Fitzgerald, L.P. is a financial services firm founded in 1945. At the time of the attacks, the firm had grown to be one of the largest, if not the largest, bond trading firms in America. It had more than 5,000 institutional clients, being one of only 21 firms that traded US bonds with The Federal Reserve Bank of New York. It was located on the doomed 101-106 floors of the World Trade Center.

Howard Lutnick, the focus of our dissention in this doc review, was named President and CEO of Cantor Fitzgerald in 1991 and Chairman in 1996. His reputation for ruthlessness may be as true as it is commonplace in the stratospheric salary circles of investment bankers working in the world’s top financial centers. If CF closed shop, Lutnick and his buds would have had a lot to lose.

We agree on the facts. On September 11, 2001, CF lost 658 of its 960 New York employees in the World Trade Center attacks. A few days later, in a miraculous last-ditch effort with a money deal from Morgan Guaranty Trust Company (subsequently JPMorgan), CF re-opened its doors with a skeleton crew. On Sept. 19, the firm pledged to distribute 25 percent of its profits for the next five years, along with ten years of health care, to families of its 658 former employees. These profits would otherwise have gone to the partners of the firm.

Wilkinson: This was a gift from the partners to the families of the deceased employees, and this film makes sure the viewer gets the picture. By 2006, the company had completed its promise, having paid a total of $180 million, with an additional $17 million from a relief fund run by Lutnick’s sister, Edie.

Lutnick and the rest of the firm’s leadership have milked this gesture of generosity for all it is worth. In the eyes of some, they have milked it for more than it is worth.

The complexity of this situation lies in the uniqueness of the terrible tragedy that caused it. There is simply no comparison to a firm compensating the survivors of employees killed through natural disaster. They had no obligation to do anything. The question is, have the survivors been used as public relations pawns to secure and cement bond sales for Cantor Fitzgerald?

The answer, to paraphrase Mr. Dylan, is blowin’ in the wind.

Questad: Who cares if the survivors are being played or not? When the Pentagon was hit on the same day, we didn’t hear the government offering special deals beyond policy to the families involved. What about the rest of the Trade Tower companies that were hit – did we hear of generous family packages for their workers? Furthermore, when the Columbine and Sandy Hook student massacres took place and the Oklahoma City bombing rocked our world, did we see the government rush to families with extra compensation?

The point is, the immediate reaction of Lutnick, who also lost his brother that day, was compassion, not avarice or self-protection. There might also be some divine, if not coincidental, providence involved. Lutnick had been prepared. At age 18 he lost his mother and then a year later his father. The middle child of three, he banded with his siblings for support. Though abandoned by family members, Lutnick’s college gave him a full scholarship in response to his loss. Through grief, bonding, resiliency and a college that cared, the Lutnicks succeeded.

Lutnick’s tears on CNN in the aftermath of the attacks were not fake. His outreach to all the affected families was from a deep empathy that came from personal experience. 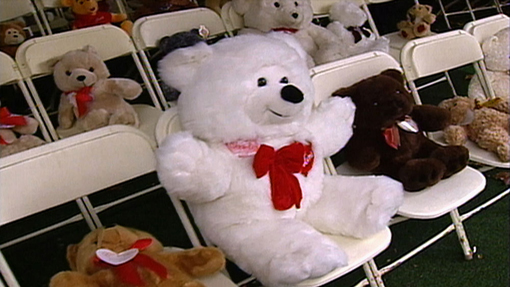 Wilkinson: The reason I still think this film seems phony is that there is such a vast amount of information that is not presented and to which we, the viewers, have absolutely no access. This stands in stark contrast to the information in the film to which we are granted full and complete access and which is conveyed to us with sparkling clarity. For example, to date the firm has distributed $180 million to over 800 families. It is not clear if this includes medical coverage. For the moment, assume that it does not.

$180 million sounds like a lot, but divided by 800 families this equals $225,000 per family, distributed over 5 years and completed in 2006. Excuse the poor arithmetic, but this appears to equal an average of $45,000 per year, per family. This is compared to about $20,000 per year each family would have received through unemployment and probably about the same through welfare and food stamps. Of course, they have all received zero since 2006, other than health care coverage.

With all due respect to CF, these payments were better than nothing and nobody is suggesting the firm take the money back. However, returning to the critique of the film, this is a movie constructed to co-opt the grief of a nation in favor of Cantor, not a film to provide “closure” to the aggrieved families. In the greater New York City area, $45,000 per year (before taxes) is barely enough to buy food, pay utilities and make the most minimal rent payment. It is nowhere near enough to make a mortgage payment, let alone build up a college fund.

Questad: Surely $225,000 is a good start on a fine college education. Wasn’t that the golden egg that Lutnick got and wasn’t that the greatest gift in assuring his ultimate success?

Wilkinson: Maybe that’s so, but what did the executives do for themselves? What was the total of, say, the top ten execs’ income, annually, on average, during that same period? Nobody except the execs knows for sure, and they are not talking. After all, that is their business and not ours. However, we have all heard the stories of million dollar bonuses to Goldman Sachs executives, even in the wake of America’s recent, severe recession. If those numbers are even remotely applicable to CF execs, and assuming their salaries and other benefits equaled their bonuses, they could have pocketed two million each per year as a rough average. This multiplies to $240 million during the last twelve years in which they gave $180 million to the families, apparently little more than enough to keep the families alive.

In the final analysis, it seems to me that the money CF paid to the families had more to do with securing CF’s good name. A good name is vital in the bond business, because many of CF’s clients are public entities such as city and state retirement funds and other retirement funds and savings programs that are very much under the scrutiny of the public. A man like Mr. Lutnick can afford to be a villain on Wall Street, but he cannot afford to be a villain in the homes of Americans whose retirement funds contain billions of dollars’ worth of bonds supplied by Cantor Fitzgerald. 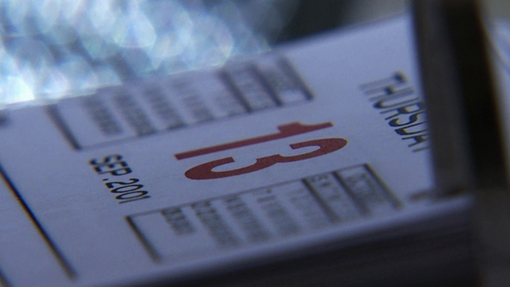 Questad: Ron, let’s leave the money trail, and your support of the Occupy Wall Street movement for a moment and go to the purpose of this film. While this doc does center on CF, its stated purpose is to document the aftermath of 911. Danielle Gardner, the director, lost her brother on the 105st floor. She has said that making this film was a way for her to process her traumatic loss. The volatile reactions to Lutnick by the surviving families through time are not sugar-coated. At times they accuse him of grandstanding and reneging on his promises, but in the end he is embraced.

“Out of the Clear Blue Sky” provides an important part of 911 history. Juxtaposed to the acts of the terrorists, Gardner lets Lutnick’s compassionate tears and generosity provide a grace to the evil of the day.

Wilkinson: That’s one way to look at it. But the fact is that nobody knew the truth before this film about how much wealth the partners of CF shared with employees. Nobody knows the truth after, either, since we are not told the value of the publicity garnered by this film and even the rough impact of that on CF executives’ paychecks. Lutnick himself did not appear in the film, his part being played by professional actor Michael Santosusso. So the basis of the film as a documentary gets even shakier. How one-sided can a film be, telling the truth, but not the whole truth, and still be a “documentary”?

To keep in the spirit of a true documentary, in order to help eliminate cynicism on the true motives and purpose of the film and CF, Gardner would have better served the viewers by dropping some poorly executed reenactments while adding some outside voices and some outside information to show how much of the pain CG executives and rich shareholders really suffered on behalf of the families of their deceased employees.

Questad: I checked in with the filmmakers and publicists of “Out of the Clear Blue Sky” via email and a phone conversation. First of all, I learned that CF has had no part in funding, supporting or marketing this film, so perhaps your intimation that this film sports positive publicity for CF is misplaced. Second, here’s the response from the filmmaker’s office about the re-enactment segments: “These were reenactments to help viewers visualize what happened. It would not have been appropriate to ask those who had to endure these difficult events to relive them.”

Maybe some of your guesses come close to some motives behind CF donations to the surviving families. We don’t know. But I’m sticking with the belief that the film’s intent is all about grace – about Gardner’s brother who walks towards the sea in the sunset in a home video, and about Lutnick’s compassion and generosity, a silver lining in a time of devastation. This is an important film on the legacy of the Twin Towers and it should be seen. 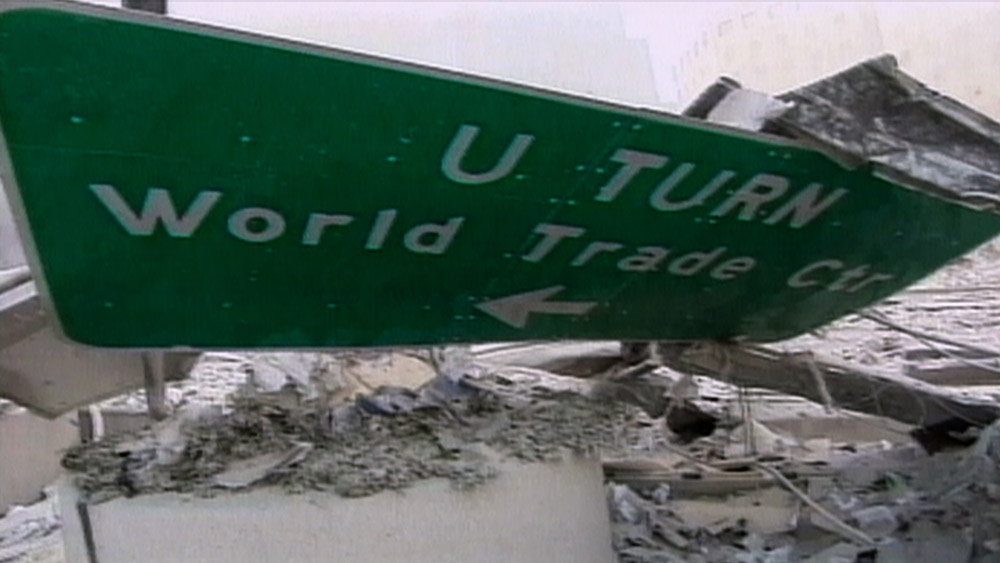