Review: 14 PEAKS: Nothing Is Impossible 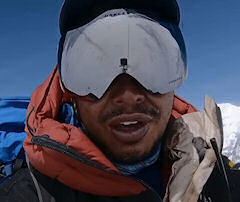 Back in 1953, the world thought Sir Edmund Hillary succeeded at the impossible by climbing Mt. Everest, the tallest mountain in the world. He was joined by Sherpa Tenzing Norgay, the first to summit. Sixty-eight years later, Nimsdai Purja broke all the mountaineering records, climbing not only Everest but the 13 other tallest mountains in the world within seven months. But did you hear about it?

For some strange reason, the feats of the Nepali climbers, the ones paid a pittance to carry and set the ropes and ladders over the most treacherous terrain, are usually not mentioned while the paying climbers ascending the summits free of gear receive the glory and massive endorsements. Nimsdai wants to change that. He’s one revolutionary Nepali who demands recognition for the skill of the Nepali high altitude mountaineers.

A Drive to Inspire
Nimsdai Purja is a physical masterpiece with an intense personality. He remarks, “The biggest strength I have is No Fear. When you are in the mountains you find out who you really are. Any mistake I make could be death. And when it comes to that moment you want to survive. You want to live. I live my life that way.”

“14 Peaks” is a biography of Nimsdai just as much as it is a stirring record of summiting the 14 tallest mountains in the world in record time. He faced tremendous obstacles including money and his obligations to his family. At every turn he was called to abandon his dream. Being the youngest son he was responsible for caring for his dying mother, and being a husband he had a responsibility to support his wife.

Persevering, Nimsdai says, “I wanted my 14 Peaks Challenge to inspire people with the love of the Big Mountains. But more than that, I want everyone to know that if you set your mind to something you can achieve it – no matter who you are and where you come from.

Why Climb?
Nimsdai’s family is interviewed. Their reactions range from acceptance to anger. His wife wisely says this is the way he is, driven by a love of climbing mountains. In order to fund his climbing it seems that they have to use their house. His brother is seriously concerned over his brother’s obligations to the family as well as scared his brother will die. As for his fragile mother, Nimsdai is motivated to finish climbing the 14 peaks before she dies.

We are left with odd feelings about mountain climbers. Do they really do it for any altruistic goal or do they have some insatiable drive to prove themselves, to take great risks, and/or become famous. What truly drives the climber?

Like an obsessive-compulsive, Nimsdai forges on. At one point he throws a massive party on the slope, then learns, because of the weather, his team must complete a fast ascent beginning the next day. As Jimmy Chin, famous for climbing and skiing Mount Everest from the summit, comments, “Absurd! Climbing in one day while hung over.”

Bottom Line
The storytelling that made Chin and Vasarhelyi famous in “Free Solo,” is missing in “14 Peaks.” While the photography Nimsdai and his partners take is stunning, and Nims’ life is remarkable, there is no suspense or tension to lead the film emotionally. In addition, the viewer is conflicted about Nims’ goal as he, the youngest son who is responsible for his dying mother, keeps leaving for yet another mountain, shirking traditional values and Nepali responsibilities, for Nepali honor.