“Is there some society that you know that doesn’t run on greed?” Executive produced by Brad Pitt, “Big Men” opens with this question. It also tells the true story, with impressive access and documentation, about a little Texas company that finds oil in Ghana. Everyone wants to be a major player, a big man, in the windfall. But, what is the best thing to do? 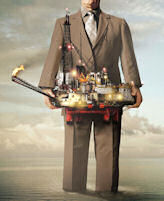 With Nigeria as it its bad example, Rachel Boynton, film-maker extraordinaire, compares what Kosmos Oil proposes to do differently in Ghana. The Nigerian backdrop is instructive because the oil business has backfired there, creating a tragic mess that has been tearing apart Nigerian society and resulting in greater poverty. How could this happen? How can it be avoided?

Well-researched with extensive longitudinal footage, “Big Men” takes us from Kosmos’ 2002 idea to develop an oil enterprise in Ghana to the 2011 end result.

In 2002, Jim Musselman — a tall, charismatic optimist — meets the Ghanian leader, bestows seven bottles of Hennesy and 10k for an education fund and proclaims, “We’re going to do our best to make Ghana much more profitable in the future.”

Boynton skillfully juxtaposes Musselman’s dream plan to Nigeria’s reality. One of the biggest oil producers, Nigeria is the 5th greatest source of oil for the US. However, life has become increasingly worse for the average Nigerian as increasingly more oil has been exported. Tribal areas disagree about oil ownership and benefits, government officials have underground rebels siphoning oil off pipelines and locals war against themselves in their hunger for what they perceive is a fair share of the treasure.

The Norwegian oil revenue plan is presented to the Ghanaians. It does not reward individuals but the entire nation and its future. Knowing that someday the oil will be depleted, the Norwegians have made investments to support their people both now and in perpetuity. Each Norwegian is cared for from birth to death with the basics of health care, education, elder care and yearly vacation plans.

The plan appears to be dismissed as inapplicable to an African situation. There is not enough loyalty or dedication to a specific national identity. Regional and tribal interests are too strong.

What were the biggest risks to filming this story? The standard equatorial African environment: heat, humidity, food and water contamination, disease, social instability, political pressures and rebel volatility. But still Boynton gains access to masked Nigerian militants and follows their activities from oil well bombings, collusions with officials in pipeline compromise, and your basic home-grown intimidation.

But what does African oil management matter to the average western viewer? Who cares? Why is a film on corporate extension into a developing nation important? And specifically, do we have a collective responsibility in matters so huge yet distant?

Those are the questions. See the film. “Big Men” is showing as part of the Voices in Action Human Rights on Film series at the Northwest Film Center in Portland, Ore. on Oct. 24. 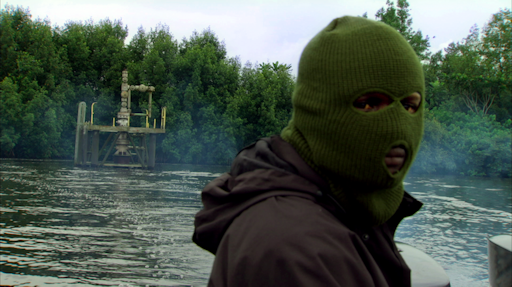