“Being a Democrat in Wyoming is like being a burr under a saddle,” says Charlie Hardy. He ran for the US Senate against Mike Enzi, the Republican incumbent since 1997. A documentary was made of his campaign effort covering the whole of big sky country in 2014.

Fake news??? How about fake democracy? 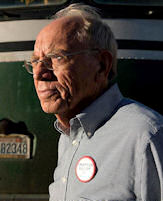 Voters beware. Question authority, research the facts and have conversations on the issues. Most of all, everyone in Wyoming should be sent this review and see this film. It is specifically about them and how money bankrolls candidates who support issues counter to their constituents’ real individual needs, values and interests.

The filmmaker, Reed Lindsay, is an acclaimed director with credits as diverse as his work on a 15-year old girl in India wanting to become a boxer to being one of the first to enter Libya after the uprising and co-creating the film, “Benghazi Rising.” He is a master in exposing the abuse of power and social injustice throughout the world.

Interestingly, Lindsay lets Charlie define himself, while letting the research show that Charlie’s opponent, Mike Enzi, is in the back pocket of the coal mining industry while not supporting a basic living wage for his constituents. In a state with about 250,000 voters, Enzi raised $3.3 million in campaign contributions, with 99 percent coming from outside Wyoming. His political contributors included Exxon, Google, McDonald’s, Pfizer and Walmart. He earned more than 50 times than Charlie, which was $62,468. Charlie insisted on raising all his funds exclusively from individuals in Wyoming, which resulted in having no possible budget for TV or radio ads.

Admittedly, it took research on my part to find out Charlie’s political platform as the film primarily focused on Charlie’s character. However, even when giving a speech, Charlie himself often prioritized short talk time above campaign platform explanations. When asked by a TV man what he thought it would take for him “to win the hearts and minds of Wyoming citizens,” Charlie broke out into song: “To know know know me is to love love love me…”

Hardy’s campaign site is online and his platform reveals five major issues with brief explanations. Here they are summarized:

1. Get Money Out of Politics
2. Raise the Minimum Wage – “When he was growing up, a person working a 40-hour week could support a family. Today, millions of Americans work two or three jobs and still can’t.”
3. Support Veterans
4. Stop Costly Foreign Entanglements – “We’ve made more enemies than friends in the world and we aren’t any safer.
5. Get Government out of our Private Lives – “NSA should be leashed or abolished.”

Lindsay shows that Charlie’s campaign is analogous to a faith journey. Once a priest, Charlie chose to learn Spanish and live in poverty where he served the poor in Caracas, Venezuela. In this campaign, Charlie and his few volunteers go door-to-door in the poorest neighborhoods of Wyoming where they hand out brochures on how Charlie can help their situation. Then they sleep on the bus.

As Charlie jogs past windmills in his daily exercise regimen, Lindsay creates a parallel to Cervantes’ “Don Quixote,” who dreamed impossible dreams and fought hopeless battles against improbable windmills. Yet still, I wanted Charlie to win.

As Lindsay gives a countdown to the days and hours of the election results, a palpable suspense is created. Can a miracle happen? Can a good guy win? 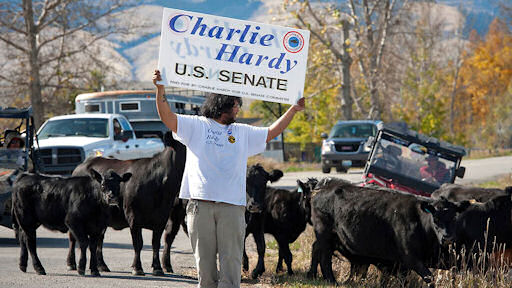 “Charlie vs. Goliath” plays one day only, Sept. 28, at the Northwest Film Center’s Whitsell Auditorium.