When asked where they are and why they are there, Ray replies, “I don’t know, I’m trying to figure it out.” Well, so are we. Thankfully, by the end of this 90-minute potboiler, we know where we are, and it is good. In the interim, however, we are where the players are, lost in a parallel universe where nothing seems to quite add up. 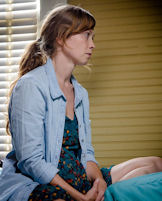 As it turns out, it adds up for one of the characters. They know why they are there and what it will take to get out. The others do not, and they are victimized by the third. Not just another horror whodunnit, director Michael Williams dares us to nail the sickie. Is it Vera (Virginia Newcomb), the pretty young housewife who seems to have been born on edge? Or is it Ray (Michael LaCour), the model husband who is trying to figure it out? Or is it young teen Sam (Cannon Bosarge), who is a little too teenage to bear and has a lot of bad dreams?

Medium Charon (wonderfully grisly work by Dorothy Weems) shows up on the scene to help, but ends up throwing cold water on the party. Or are those just more drips from the Lynchian leaking faucet that never gets fixed? The soundtrack is spare, allowing the action to center on the house itself and what clues it might provide. It seems to provide everything, except freedom.

The low-tech nature of the movie, flavored with vibes from “The Shining” to “Pulp Fiction,” takes us back to legitimate Hitchcockian horror, when those showers, stairs and doors provided us with all the tension required. The doors of this house seem to have a mind of their own, admitting the bad things but preventing the escape of the good. No particular special effects required. What you see is what you get, except distortions come and go, almost without us knowing. In the end, however, the duplicity itself becomes somewhat hard to follow.

Possible Oscar nomination for best creepy house in a summer stock movie thriller. The 130-year-old home seems to creak and groan all by itself. Sometimes aided by the monsters of conscience and sometimes just by the whim of the director. Good old hard wood surfaces reflect and echo every bump in the night, and the great, steep, sharp angled stairways give us plenty of odd angled shadows.

Blessedly light on the jump scares and the sudden load noises, the movie starts out with the obligatory thunder but ends that soon enough. Williams’ black painted monster men showing up the end to exact vengeance do more harm than good. After all, the guilty party has provided plenty of punishment for themselves, and others as well. Might have been better to leave well enough alone and have them pass on to their final destination without any outside help. After all, we all make our own purgatory, don’t we? 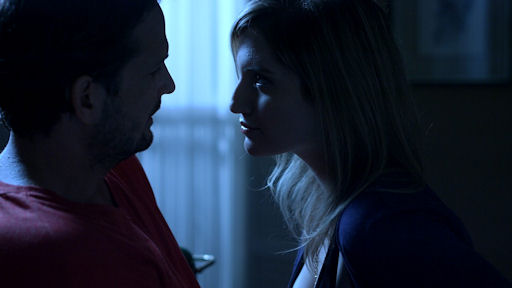