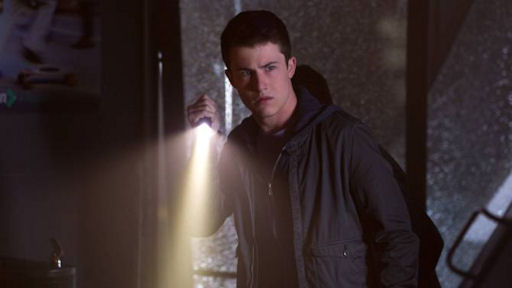 Breakout writer/director Fede Alvarez unleashes a corker of a teen caper horror flick with “Don’t Breathe.” The movie starts out slow with the usual semi-lame dialogue and pretzel logic, but things pick up quite nicely right to the end. The screenplay, co-written with Rodo Sayagues, features three marginalized teenagers in Detroit looking to make ends meet by burglarizing houses. One boy is the thinker, one is the thug and the girl just wants to get out of Detroit and move to the promised land of California.

OK, you just have to get by some of the dialogue. But stay with it, it is worth it later on. Dylan Minnette (Zach in “Goosebumps”) plays Alex, who plans the break-ins and busts the home security systems. This is easy because his father owns the security company that installs the alarms.

In betraying his father, who is working hard to support him, Alex starts the film out on the right foot with a good dose of guilt. Minnette is able to channel these pangs of conscience into a dread of their next thievery. This dread is amplified by the disability of their victim, a blind veteran returned from the Middle East.

We know from the get-go that this particular blind veteran has a few tricks up his sleeve. The kids do not know this, because they are stupid. But Alex feels it. It is a credit to director Alvarez that we feel it too. There is going to be some righteous bloodletting coming right up. Thuggish Money (Daniel Zovatto) will be the first to go, because Money is the cockiest and he deserves it most. As Rocky (Jane Levy) and Alex flee through the house from the psycho blind man, played to the hilt by Stephen Lang (Colonel Quaritch in “Avatar”), grisly secrets are revealed that make the duo wish they had never been born.

As the tension ratchets up, the campy splatter starts. The film misses the opportunity to make more of the semi-psychic skills the blind man seems to pull out of his head as he shoots wildly through the several floors of the rundown structure. Sometimes he seems to know exactly what is going on and other times there are bullets flying all over. But Lang makes up for it in spades as Rambo with a hornets’ nest strapped to his jock strap. Thank goodness the neighbors are sound sleepers. We would not want the cops to come until the end.

Rocky and Alex survive wounds that would kill zombies as they bounce from room to room. Gunshots, the pruning shears in the back. All in a day’s work. When the blind man is down, his foaming mouth attack dog takes over. Excellent cinematography by Pedro Luque filming the dog chase through the ancient, rotting wood framed heating ducts ending in the attic and Rocky’s bone crushing fall back to the basement.

Possible Oscar nominations for Stephen Lang for best artificial insemination with a turkey baster and for the attack dog for best performance of slimy snarling jowls. Be there or don’t breathe. 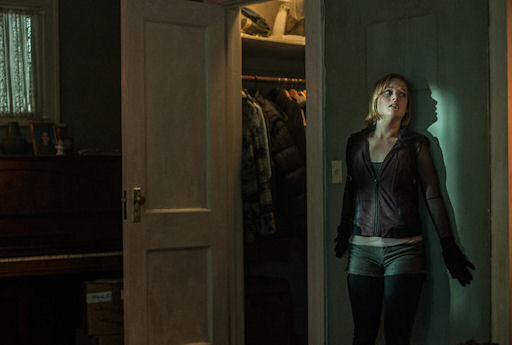